Syrian ceasefire hangs in the balance as US, Russia spar 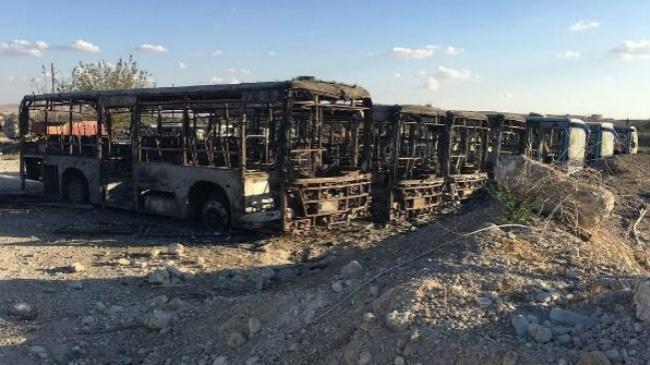 (CNN) -- Syria's nascent ceasefire hung in the balance Monday after an airstrike on a United Nations aid convoy led the US to question Russia's commitment to calming violence in the war-torn country and its ability to influence its ally in Damascus.

"What happened today has dealt a serious blow to efforts to bring peace to Syria," said a senior US administration official, who added that the strike "raises very serious questions about whether the Russians can deliver their end of the arrangement" to rein in the Syrian regime.

Asked if the US was still open to extending ceasefire efforts, a second administration official said Russia now bears the burden of demonstrating its commitment to peace efforts, "otherwise, there will be nothing to extend and nothing to salvage."

It was the latest blow to efforts to pause Syria's hostilities, coming after regime bombing of rebel-held areas and a spat between US and Russia as they traded barbs about who bore responsibility.

The Syrian Armed Forces General Command issued a statement Monday declaring that "the US-Russian ceasefire deal started since September 12th is over." Soon after, its jets struck in and around Aleppo killing and wounding people in the area, according to the Syrian Observatory for Human Rights.

Earlier Monday, before the UN convoy was struck, US officials said that any decisions about the ceasefire would be made between Washington and Moscow, which brokered the deal last week. "The Syrians didn't make the deal," Secretary of State John Kerry said Monday, "the Russians made the agreement."

The US wants to see Russia restrain its close ally President Bashar al-Assad, who has battered opposition forces largely supported by the US. At the same time, both the US and Russia are in the skies striking terror targets. The two countries had agreed that completion of a successful seven-day ceasefire would mark the starting point of greater military coordination against ISIS and other militant groups.

Kerry, speaking in New York at the United Nations General Assembly earlier in the day, said that US and Russian officials were meeting in Geneva to discuss the ceasefire and the deliveries of humanitarian aid to besieged areas, which were a key requirement of the deal from the US perspective.

"The important thing is the Russians need to control Assad, who is evidently indiscriminately bombing, including on humanitarian convoys," Kerry said. At the time, he said, the "basic ceasefire is holding, but fragile."

The ceasefire is the most recent attempt to bring enough calm to the ravaged country to allow political negotiations to begin. In the five-and-a-half years since Assad's regime cracked down on a March 2011 anti-government demonstration, an estimated 430,000 people have been killed. Millions have been displaced inside Syria or fled the country.

At a UN meeting on migrants, Kerry said the nations gathered had reaffirmed the right that impartial aid workers should be granted unfettered access to deliver emergency assistance to civilians. He added then that the US had heard about "an incident" that he said "flies directly contrary to that right."

A UN spokesman in New York confirmed that at least one of its aid convoys, sent in coordination with the Syrian Arab Red Crescent, was hit on the way to the Syrian city of Orum while carrying enough food and aid for 78,000 people.

No details were immediately available on the strike, but the second US administration official said it was clearly an air attack and that US-led coalition jets weren't responsible.

"That only leaves two possibilities" for nations operating in the air in Syria, the official said, adding that either way, "Russia is responsible for its side of this equation."

The first administration official said that the strike was "fundamentally consistent with a pattern that's taken place for months and a number of years" in which Syrian regime has struck civilian areas and moderate opposition groups.

The UN's special representative for Syria expressed outrage about the airstrike, which hit the UN aid convoy west of Aleppo.

"Our outrage at this attack is enormous," said Staffan de Mistura. "The convoy was the outcome of long process of permission and preparations to assist isolated civilians."

The first administration official said the US is trying to gather as much information as possible to find out what happened, adding that Kerry will consult with key partners, as well as his Russian counterparts, Monday night and Tuesday morning. The official added that Kerry is in close coordination with the White House.

Kerry and Russian Foreign Minister Sergei Lavrov brokered the ceasefire that went into effect Sept. 12. The goal was to have seven consecutive days of reduced violence, during which the Syrian regime could only attack jihadist groups such as ISIS and an al Qaeda affiliate known as Jabhat Fateh al-Sham, the group formerly known as al-Nusra Front. Humanitarian aid was supposed to flow to Aleppo and five other areas in Syria during that time.

Once the US and Russia had agreed that seven relatively calm days had passed, Washington and Moscow were supposed to establish a Joint Implementation Center to coordinate further strikes against militants.

That would have required the US to share information with Moscow, a prospect that made some Pentagon officials uncomfortable.

Asked about the Syrian declaration that the ceasefire was over, Kerry said, "We have not had seven days of calm and of delivery of humanitarian goods." He added that "it's time to end the grandstanding and time to do the real work."

Even before Monday's declaration by Syria that the ceasefire was over, and before the attack on the aid convoy, flare-ups of violence were marring its progress. The Syrian Observatory for Human Rights reported civilian deaths from airstrikes in Idlib on Friday and in Aleppo on Sunday, though it didn't identify the perpetrators.

A US airstrike on Syrian forces on Saturday also caused trouble. The Pentagon said the strike was accidental and US officials expressed regret, but Russia and Syria raised the possibility that the US was acting in support of ISIS.

"Whenever the Syrian state achieves tangible progress either on the ground or in national reconciliations, the states that are hostile to Syria increase their support for terrorist organizations," Assad said Monday, according to Syria's state media outlet SANA. "The most recent example of this is the flagrant US aggression on a Syrian Arab Army position in Deir Ezzor for the benefit of ISIS."

The US administration officials wouldn't address the question of whether the strike on the UN aid convoy might have been in revenge for the deaths of the 62 Syrian soldiers killed Saturday.

And Russia questioned the timing of the strike, two days before information sharing and cooperation between Moscow and Washington would have theoretically started.

The US strike was "an extraordinary display of American heavy-handedness," Russia's ambassador to the UN, Vitaly Churkin, said Saturday.

US Ambassador to the UN Samantha Power hit back Saturday, describing the Russian move as "a stunt replete with moralism and grandstanding" that was "uniquely cynical and hypocritical."

Russian planes have supported the regime's air force in hitting hospitals and refugee camps, she said, before going on to accuse the regime of "bombing in defiance of the cessation of hostilities."