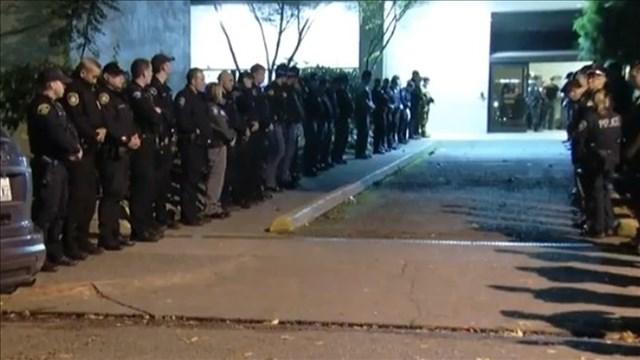 (CNN) -- The suspect accused of shooting and killing a Tacoma, Washington, police officer was killed early Thursday after a standoff with authorities that lasted for hours, officials said.

A Pierce County sheriff's deputy shot the suspect, who had been using two children as a shield, Detective Ed Troyer said.

"We didn't want the kids to get hurt on top of everything that happened. Unfortunately, such a horrible situation, this could have ended a lot worse," Troyer told reporters. "The suspect's deceased. The kids are safe. That's really what we're very thankful for."

Police said the officer, who has not yet been publicly identified, was responding to a domestic dispute Wednesday afternoon when the suspect shot him. He died Wednesday night.

Dozens of police officers lined up outside the hospital to pay their respects, CNN affiliate KIRO-TV in Seattle reported. They formed a procession to take the officer's body to the medical examiner's office.

Once authorities learned the suspect was using children as a shield, they patiently tried to negotiate with him through the night.

"The negotiations failed," Troyer said. "We went in, took one of the kids when we had a chance, and he grabbed the other kid. One of our officers felt he had a shot. He took it."

Throughout the night, officers from different agencies acted heroically, he said.

"Everybody came together to help keep this neighborhood safe. It's a horrible beginning to this. ... The ending to this is equally as sad, but we still have two really safe kids, and no other neighbors and no other officers got hurt," Troyer said.

Washington Gov. Jay Inslee sent his condolences to the family of the slain officer via Twitter.

"Trudi and I send our thoughts and prayers to the family and loved ones of the Tacoma police officer killed tonight in the line of duty," Inslee said.

Law enforcement agencies across the state also expressed solidarity with the colleagues and family members of the slain officer, CNN affiliates reported.

Near the scene of the standoff, according to KIRO, a couple came up to an officer standing guard and gave him a hug.

On the opposite side of the country in North Carolina, the Raleigh Police Department is conducting an investigation on the events that led to an officer being shot.

The officer was responding to a residential break-in, authorities said.

Witnesses told CNN affiliate WRAL-TV in Raleigh they heard gunshots and then saw a police officer on the ground.

Authorities have not released any detailed information about the shooting. The officer is being treated for injuries not considered life-threatening. The suspected shooter is in critical but stable condition at the same hospital.