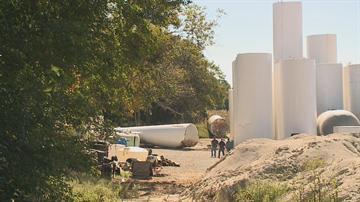 The sound of the explosion was heard nearly a half a mile away, “We weren’t sure where it was from or what happened but it sounded like an old stick of dynamite that blew up.”

James Martin said the loud boom made his entire shop shake. Worried and a bit curious, Martin got into his truck and followed the sirens, just over the hill he saw all the flashing lights in front of T & T.

“I just started to pray that they were okay,” he said.

Two of Martin’s friends had been called out to T & T that day for services jobs to weld one of the tanks.

“They welded on that tank hundreds of times and nothing, it’s not an explosive, it’s not flammable. God knows what,” Martin said.

Aqua ammonia is not flammable, but when it’s heated the substance releases ammonia gas and when that’s mixes with oxygen it can explode.

Martin one of his friends, a man in his twenties was on a ladder near the top of the tank. The other, a 17-year-old was on the ground, he saw that the tank was leaking, yelled and started to run. Both the men tried to evacuate the area as quickly as possible, but couldn’t escape in time. The tank exploded with the two welders close by.

Martin said, “It blew out the bottom and the tank actually flew 70 feet up in the air over that cluster of tanks over there and landed on the other side.”

Harrison Township’s Fire Chief, Kurvin Martin said four people were taken to the hospital for burns from the ammonia vapors.

“We hosed them off and got them out of the scene and got it off of them that way,” the Chief said.

Three people were taken to Elkhart General, while one man, the welder on the ladder, was air-lifted to Memorial Hospital in South Bend.

Chief Martin said T & T has a dam system to contain any hazardous materials, but to be safe a containment crew came in and ruled the area was all clear.

“There was never any immediate danger to the public,” Chief Martin said, “The injuries that the patients sustained were from the initial explosion.”