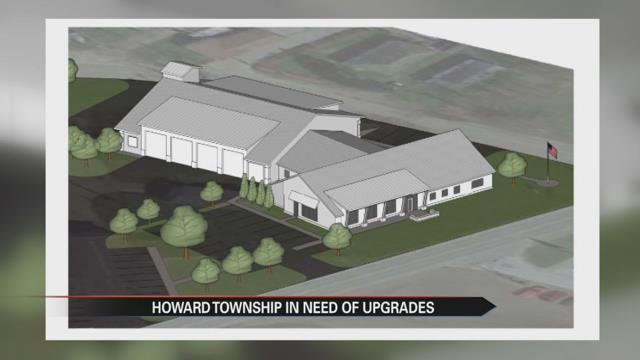 Residents of Howard Township will decide on Tuesday if they want to raise their taxes to fund construction of a much-needed fire station and town hall.

“The station was built in 1948 and it’s did [sic] its job, but right now, it’s coming to the point where it’s just falling apart,” Howard Twp. Fire Chief Ed Leneway said.

Leneway said his station’s parking lot is caving in, the roof is leaky and his firefighters barely have room to operate.

On top of that, he can only purchase older-model fire trucks that fit in his old station – forcing his firehouse to recently downsize from a 3,000-gallon tanker to a 2,500-gallon one.

“Because the newer trucks are too tall, they wouldn’t even fit in our station, so we lost 500 gallons of water just because of our station,” Leneway said. “Only a quarter of our township is protected by fire hydrants; the rest of it, we haul it all.”

These problems couple with the Howard Twp. Hall building just down the road.

It’s nearing its 100th birthday, it lacks handicap accessibility and it only offers one workspace for all township officials.

“If we get on this year’s list, they’ll guarantee us the money,” Howard Twp. Supervisor Craig Bradfield said.

The ‘list’ is for a loan application that would provide Howard Twp. with nearly $4 million from the USDA to build a combined town hall and fire station.

The deadline to apply is the end of September, but in order to pay back the loan, township voters have to okay a tax increase of about $45 per year, for 40 years, for an average homeowner.

The vote will take place on the August 2 primary.

If the proposal is not approved, the township may be able to fund construction of a new fire station through a special assessment, but Bradfield said that would not cover the costs of a new town hall – and the price for that will continue to go up the longer it is not built.

If the proposal is approved, construction could start as early as next March.