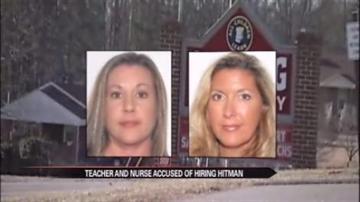 A kindergarten teacher and a school nurse are accused of hiring a hit-man to kill one of their ex-husbands.

The two were friends and worked at the same school in Virginia. Nolen is accused of paying $4,000 to an undercover police officer who she thought was a hit-man.

"The mere fact of what she did was so egregious," said Tim Allen, a Virginia common wealth attorney. "You have to look at that and the danger to the community and that is what the commonwealth is worried about."

The teacher and the nurse remain behind bars.