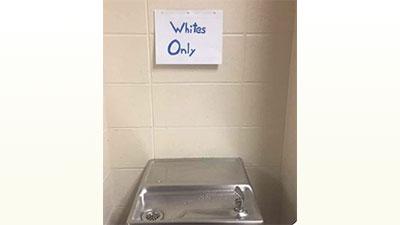 A Concord High School teacher has been put on paid administrative leave for instructing students to place 'whites only' and 'blacks only' signs near bathrooms and drinking fountains in the hallway of the school, according to Concord Schools Superintendent John Trout.

Trout says the social studies teacher instructed the students to post the signs in the high school hallway to demonstrate the feel of government sanctioned segregation that used to exist in parts of the country.

Trout says the teacher did not seek approval for the experiment.

Once the signs were discovered, school officials removed the sign and spoke to the students in the class.

The teacher on administrative leave has not been identified.

Trout says the district appreciates innovative teaching approaches, but does not support methods that could be harassing or discriminatory.

The superintendent's full statement is below:

Concord Community Schools strives to create a welcoming atmosphere for all of our students, who come from many diverse racial, ethnic, and religious backgrounds.  Concord High School’s stated mission is to both academically challenge and equip our students.  To that end, many of our high school educators include in their instruction current and historical events that may contain controversial subjects and topics.  Unfortunately, like all of us, sometimes a teacher makes a mistake when attempting to educate young teenagers.  On December 4, 2015, one such mistake was made.

As part of a social studies course assignment during the first hour class, a high school teacher instructed students to place several signs in the high school hallway near bathrooms and drinking fountains stating “Blacks Only” and “Whites Only,” in an effort to demonstrate the feel of government sanctioned segregation that previously existed in portions of our country.  The teacher did not seek any prior approval of this assignment from high school or school corporation administrators. Upon learning of the sign postings, school officials immediately removed the signs and addressed the students in class.  The teacher has been placed on administrative leave pending further investigation of the matter.

Concord Community Schools appreciates its educators attempting to be innovative in their teaching approach.  However, methods and tactics that can be viewed as harassing or discriminatory to students and teachers are not appropriate and are prohibited in our schools.