#TeamFiona: How a baby hippo won over the world 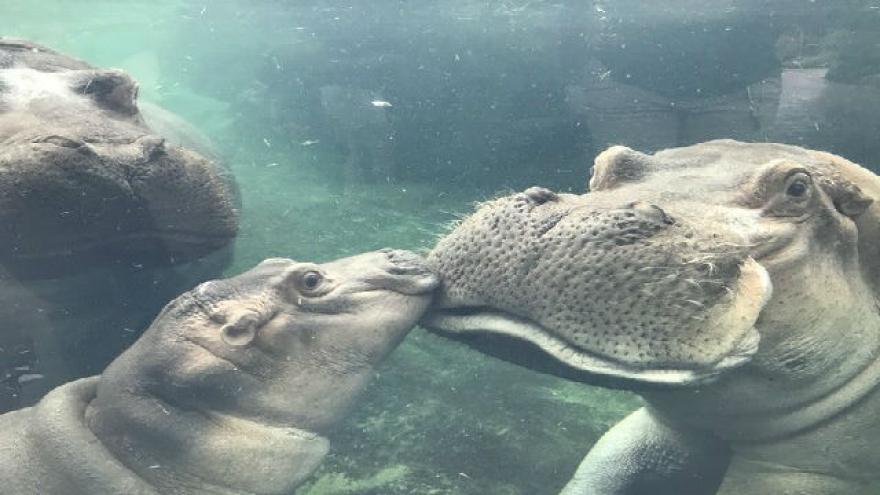 Fiona, Bibi and Henry were introduced in Hippo Cove\'s outdoor pool before the Cincinnati Zoo opened, supervised by their care team. The short introduction went well. Bibi intervened when Henry got too close to Fiona, which was exactly what the care team hoped to see. Photo courtesy Cincinnati Zoo and Botanical Garden 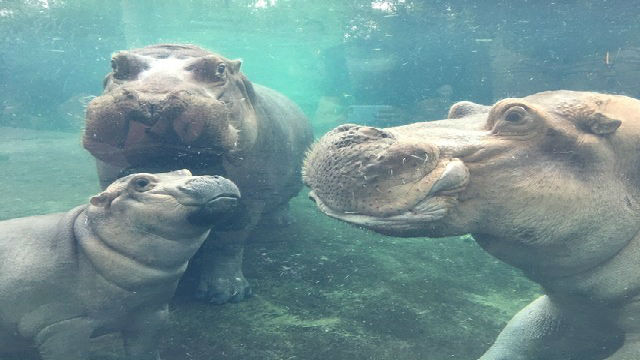 Story by Lilit Marcus with video by Jeremy M. Borg and Steven Sevilla

Thousands of people from around the world are planning trips to the United States--and not just to visit famous landmarks. Travelers from as far away as Australia, Germany, Brazil and Japan are visiting Cincinnati, Ohio, where a baby hippo named Fiona has become an Internet sensation.

Fiona was due in March but arrived six weeks early, weighing in at just 29 pounds. While that would be a huge weight for a newborn human infant, it's record-breakingly small for hippos. She was so small she could barely walk, and she was unable to stand long enough to nurse from her mother.

Several zoo staff were immediately pressed into service to care for the baby animal, forming a round-the-clock care team they began to call "Team Fiona."

They were joined by nurses from the nearby Cincinnati Children's Hospital, who are pros at finding veins and caring for wee ones.

Before long, Team Fiona was no longer just a team -- it was a hashtag.

As Fiona's health improved, the zoo's social media team began putting pictures and videos of the baby hippo online to let people follow her journey. The #TeamFiona hashtag on Facebook, Twitter and Instagram began filling up--not just with official updates from the zoo but with requests and well wishes from fans all over the world.

One video showed keepers reading Fiona some of her fan mail. Another, of her falling asleep in the shower, went viral.

As she grew bigger, one question emerged: When would Fiona, who'd been bottle-fed and cared for behind the scenes by a 25-person crew, join her parents in the zoo's Hippo Cove, ready for the public to visit her?

"We started really slowly after hours, so she would get used to faces and people and cameras," the zoo's Africa keeper, Jenna Wingate, told CNN Travel.

"She has been in the limelight since she was a day or so old. Once we realized she's a ham and she loved seeing all these people, we just started sneaking her out."

Those short, unannounced visits to the hippo pool made a Fiona sighting valuable--she still doesn't have a firm schedule in place for swimming on display with her parents, but that hasn't stopped zoo guests from driving and flying long hours just for the chance to get a glimpse of her.

Now, #TeamFiona is a full-on brand. The zoo's shop is full of accompanying merchandise, from magnets to T-shirts.

And the city of Cincinnati has rallied behind their new four-legged mascot.

Listermann's, a local brewery where many zoo employees hang out after hours, created a special beer in honor of the hippo.

The first run of their Team Fiona East Coast IPA sold out in minutes when it debuted on June 10, with some people waiting in line for hours in order to be among the first to try it.

Jason Brewer (yes, that's his real last name), head brewmaster at Listermann's, tells CNN that in addition to producing more of the Fiona beer, there are plans to make additional Fiona-branded brews down the road, including possibly one inspired by a photo of Fiona and her mother Bibi. Together, they're known as #BiFi.

Meanwhile, Cincy's own Bicycle brand has made a set of Fiona playing cards (each card has a different photo of the hippo) and local clothing company Cincy Shirts made a special Fiona T-shirt, with proceeds going to the zoo.

As Fiona Fever spreads across the globe, one thing is clear: an American underdog city has an underdog story of their own to celebrate.