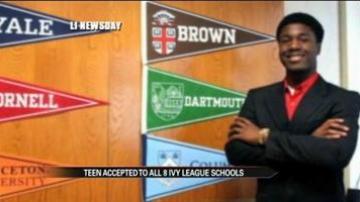 A 17-year-old from New York got acceptance letters from all eight Ivy League universities.

He scored in the 99th percentile on his SAT and was accepted to Brown, Cornell, Columbia, Dartmouth, Harvard, Princeton, Penn and Yale.

Yale only accepts 7-percent of its applicants each year. Harvard accepts less than 6-percent.

He has not decided which one he will attend but says he is leaning toward Yale but waits to see what kind of financial aid he is offered.