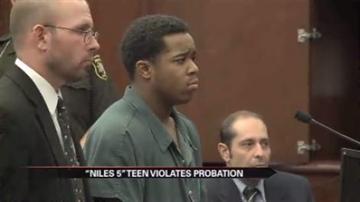 NILES, Mich. -- Martell Miller, one of 5 teens convicted in a ‘sextortion’ case could be facing jail time for violating probation. The teens forced a girl into having sex with them by threatening to post a sex tape of her onto Facebook.

Miller took a plea deal and pleaded guilty to attempted assault and battery.

After Martell Miller was sentenced in January 2012, he had 40 things he was required to do.

Many of the tasks were pretty basic, like – don’t commit another crime.

According to the probation department, he hasn't paid a dime.

They also say he failed to complete a mental health assessment. He missed appointments on December 5th, January 23rd, and February 20th.

He is also accused of having an active Facebook account, something prohibited as part of his probation. And officers say he wasn’t home when he was supposed to be to check in by phone.

Because of all of the alleged violations, the department of corrections filed with the court to bring Miller in for a probation violation hearing.

The date has not been set.

When he does go before the judge, if he is found to have violated his probation, he could be sentenced up to 5 years in prison. That is less than his cohorts received in the cases against them.