Teen electrocuted after playing on phone in bathtub 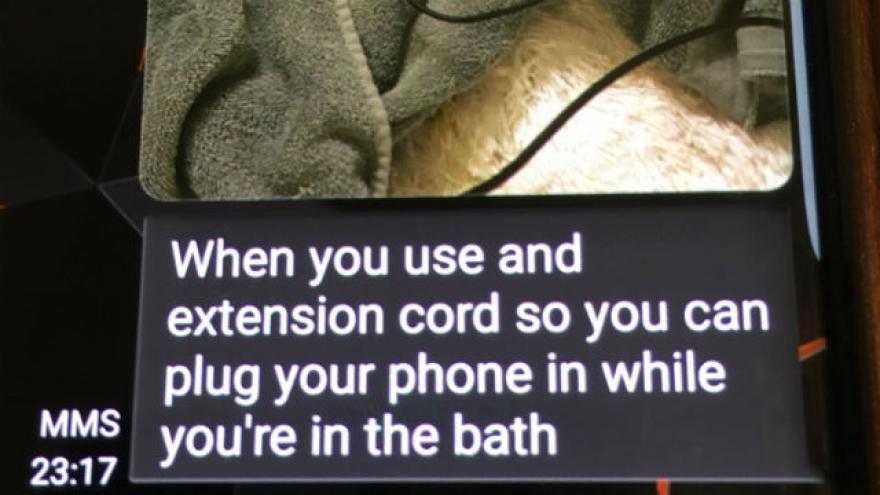 Police believe Madison Coe, 14, sent this message to a friend before she was electrocuted in her bathtub. Photo courtesy Lovington Police Dept.

CNN (CNN) -- As she often did, 14-year-old Madison Coe ran a bath to unwind before bed.

She took her phone into the bathroom and was careful to keep it dry as it charged, laying its power cords on a towel. Madison snapped a photo of her setup and sent it to a friend with the message, "When you use (an) extension cord so you can plug your phone in while you're in the bath."

It was the last time anyone heard from her.

A police investigation concluded that Madison was electrocuted July 9 while in the bathtub at her father's home in Lovington, New Mexico. Lovington Police spokesman David Miranda said the photo might have been taken up to an hour before she died.

Now her family has released that last text message she sent in the hope of preventing similar accidents.

"She had her phone plugged into the extension cord and it was by the bathtub, and I did it, she did it, we all had sat there in the bathtub with our phones plugged in and played our games," Felisha Owens, Coe's stepmother, told CNN affiliate KRQE.

Investigators believe the girl took precautions to keep the cords dry but was not aware of fraying on the extension cord, the statement says. Evidence suggests she likely touched the frayed extension cord while still in the tub, Lovington Police said.

"There was a burn mark on her hand, the hand that would have grabbed the phone," Coe's grandmother, Donna O'Guinn, told CNN affiliate KCBD.

Miranda said the family authorized release of the text and photo to raise awareness, especially among teenagers, about the dangers posed by the combination of water, electricity and portable electronics.

Madison's stepmother told KRQE she hopes others will learn from the tragedy.

"The bathroom is a place for showers and personal time, and your phones don't belong in the bathroom," she said. "Electricity and water do not mix. All it takes is a drop."

A warning to others

In light of the incident, friends and family have taken to social media to warn of the dangers of texting in the tub.

"It's overwhelming to realize that there are people that we don't even know and we'll probably never even meet that have taken this message and shared it to protect another child or even an adult. We don't want to lose anybody," O'Guinn said to KCBD.

The Consumer Product Safety Commission, which investigated the incident, recommends installing GFCI-protected outlets to protect against severe or fatal electric shocks. They also recommend testing these outlets at least once a month.

Madison's family said she was a smart and loving girl, according to KRQE.

"She loved basketball and band," Owens said. "She was first chair tuba, not many girls play the tuba, but Maddie nailed it."

She lived in Texas but was spending the summer with her dad in Lovington, New Mexico, before heading to high school in Houston.

"She was my everything," her father, Logan Coe, said.

It was not uncommon for Coe to spend hours relaxing in the bath, her stepmother told KRQE.

"You don't think to sit in there with a 14-year-old," she said. "You don't micromanage your kids anymore, but maybe you should."