Teen meets man running the Sunburst marathon - just for her 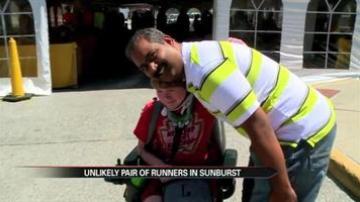 SOUTH BEND, Ind. -- A lot of people will be participating in Saturday's Sunburst race. Some of the runners won't be running for themselves, they'll be running for people who physically can't run. One local 13-year-old met the man who will be running in her place.

An organization called "I Run 4" pairs runners with people who are unable to run in a marathon or 5K.

Natalie Holmes met the person who is running for her Friday afternoon at the registration tent for the Sunburst Marathon.

"A little bit excited-kind of tired because of the school day," said Holmes.

Holmes has a disease called mitochondrial myopathy -or mito for short.

"I haven't actually like fallen thankfully-but I have to like brace myself on desks at school," said Holmes.

Mito is an energy defect that weakens Holmes' muscles - so body parts like her ankles easily give out.

That's where Srikanth Rabinuthula comes in.

"I am honored to run for her. It gives me pleasure and also makes me happy that I am doing it," said Rabinuthula.

This will be Rabinuthula second marathon and his first in Holmes' hometown.

"I'm excited about the next one- the first one was a bit slow-but I finished it and that's all that matters," said Rabinuthula.

The unlikely pair have a lot in common - a love of turtles and sunsets and they both have a set of wheels.

She says Saturday she's bringing a big sign-just in case his batteries run out of juice.

There are a lot of runners who want to run in the place of someone who is unable to run themselves.

You get to meet the person running for you on race day and get to communicate with your runner for several months leading up to the race.