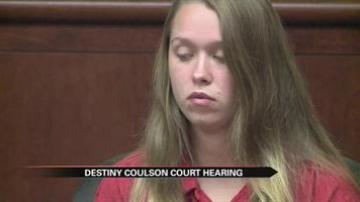 BERRIEN COUNTY, Mich. -- A Berrien County teenager who admitted to murdering her boyfriend is now pleading for another chance to prove her innocence. Destiny Coulson has already pleaded guilty to shooting David Quinn Jr but was in court Wednesday requesting to withdraw that guilty plea.

As part of her guilty plea, Coulson was sentenced to 14 years in prison and had to pay for Quinn's funeral.

Coulson claims her former attorney Lanny Fisher did not adequately represent her on the murder charge.

But Young argued there was no physical evidence that Coulson shot Quinn.

But the prosecutor said even so, there was no reasonable defense for Coulson in this murder case.
The judge denied Coulson's request to withdraw her guilty plea.

Quinn's parents were in the courtroom. His dad was pleased with the judge's decision to keep Coulson in prison.

"He made the right decision. She admitted she did it numerous times and I think she is right where she belongs," said David Quinn Sr.

The prosecutor says it appears Coulson's attorney is preparing to appeal, but says if the appeal is granted it would be months or years before Coulson would be back in court.