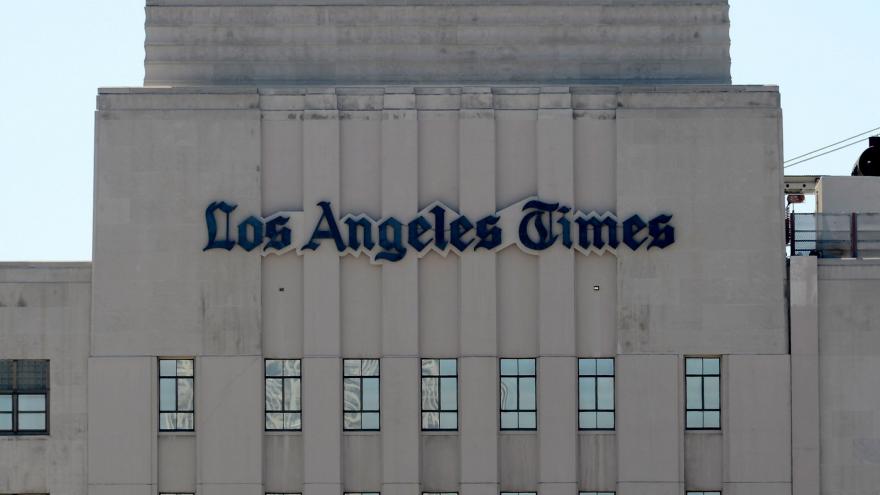 (CNN Money) -- Financial turbulence and misgivings with the newspaper's parent company have brought the Los Angeles Times to the cusp of forming a union for the first time in its 136-year history.

On Thursday, newsroom employees will cast votes in an election held by the National Labor Relations Board, the culmination of a tense months-long organizing effort. In October, Times employees went public with their efforts, announcing in an unsigned letter that a majority of the newsroom had signed cards in support of representation by the NewsGuild-Communications Workers of America

It set the stage for yet more tension with the newspaper's owner, Tronc, formerly known as The Tribune Company, which has been vigorously opposed to the union. Times employees have grown anxious with major changes brought by the parent company.

In a statement, a Tronc spokesperson said the company "urges every individual in the LA Times newsroom to get out and vote."

"We believe that by working together, rather than through a third party, we can build on the LA Times' heritage and trust with readers," the spokesperson said. "We remain committed to providing a productive and safe working environment for all employees, and will continue to act with the best interest of all of our employees in mind."

Standing up to Tronc are Times employees like Carolina Miranda, a culture writer at the paper and a member of the union's organizing committee.

Miranda said conversations about forming a union began in late 2016 -- months after Tribune changed its name to Tronc and unveiled a buzzword-laden plan of action that was ridiculed throughout the industry.

The same year saw Tronc eliminate the newspaper's accrued vacation policy for many employees, including Miranda.

"You see your benefits and pay eroded over time, and you feel powerless to do anything about it," Miranda told CNN in a phone interview.

In the letter released in October, the union's organizing committee called for better pay and protections "from unilateral change by Tronc," among other things.

For months, Tronc's leaders have waged their own campaign to thwart the effort. That continued on the eve of the vote, with a Wednesday morning email sent by Lewis D'Vorkin, the newly appointed editor-in-chief, and Jim Kirk, a Tronc executive who since August has served as interim executive editor.

In the email, D'Vorkin and Kirk warned employees that the union will likely request dues every month, and said that it will offer no guarantee of better pay nor protection against layoffs.

"Now it is really a choice of every individual in this newsroom," they said in the email, which was provided to CNN. "At stake is the culture of an institution that has served this community so well for more than 135 years. Take all the history into account when you make your decision on whether or not you want someone other than yourself representing you with our company."

"We urge you to vote NO and keep the spirit of independence," the two said in closing.

When reached by email, D'Vorkin and Kirk referred CNN to the Tronc spokesperson.

Bernie Lunzer, the president of the NewsGuild-CWA, said there was nothing new to Tronc's anti-union messaging.

"It's pretty routine," Lunzer said. "I don't see anything new or inspirational there."

The Times, the largest newspaper on the West Coast, has a stormy history with labor. In 1910, the newspaper's building was bombed by union organizers, killing 21 employees. The Otis-Chandler family, which owned the Times until it was acquired by Tribune in 2000, was staunchly anti-union.

But the paper's current owners spurred employees to take action. Tronc's change to the vacation policy was just one factor that motivated employees to organize. Another, Miranda said, was the managerial turnover at the paper. In August, the Times tapped Ross Levinsohn as its eighth publisher since 2000. Miranda herself has worked under four different publishers in three-and-a-half years at the paper.

There has also been the type of economic instability familiar to most newspapers, which have seen plunging print revenues give way to painful cutbacks. In 2015, the Times bid farewell to more than 80 reporters and editors who accepted buyouts. There was an additional round of buyouts last summer.

"We're riding out this giant tsunami on a paddle board. That's what it feels like to be a journalist these days," Miranda said. "Everyone goes to work with the specter of a layoff over their shoulders. A union offers a modicum of protections when and if they do come."

Such anxiety is felt in newsrooms across the country, not just the Times, but Miranda and her colleagues have also been driven by specific frustrations with Tronc.

Last month, Times journalists bristled when financial disclosures showed Tronc chairman Michael Ferro paid himself a $5 million a year "consulting agreement," and that the company had been paying for his private jet.

There has also been apparent friction brought on by personnel changes. Levinsohn replaced Davan Maharaj, the Times' publisher and editor in chief since 2016 who had clashed with Ferro and Tronc CEO Justin Dearborn.

And D'Vorkin, who was hired in October from Forbes, has had a rocky start to his tenure as editor-in-chief. Earlier this week, NPR published audio recordings of a staff meeting held by D'Vorkin in November, where he was pressed by journalists over a dispute between the Times and Disney.

The studio had barred Times critics and other journalists from receiving advance screenings of movies, retaliation for the newspaper's investigation into financial breaks afforded to Disney by the city of Anaheim, the home of Disneyland.

Disney eventually ended the ban after what it characterized as "productive discussions with the newly installed leadership at The Los Angeles Times regarding our specific concerns."

D'Vorkin can be heard in one of the recordings responding to employees who wanted to know what those "productive discussions" entailed. In another recording published by NPR, D'Vorkin used harsh terms to criticize the person who had leaked audio of that November meeting to the New York Times. That person, D'Vorkin said, was both "unethical" and "morally bankrupt."

D'Vorkin may be dealt more disappointing news on January 19, when the votes for the Times union are tallied.

"We feel very good about it," Miranda said.