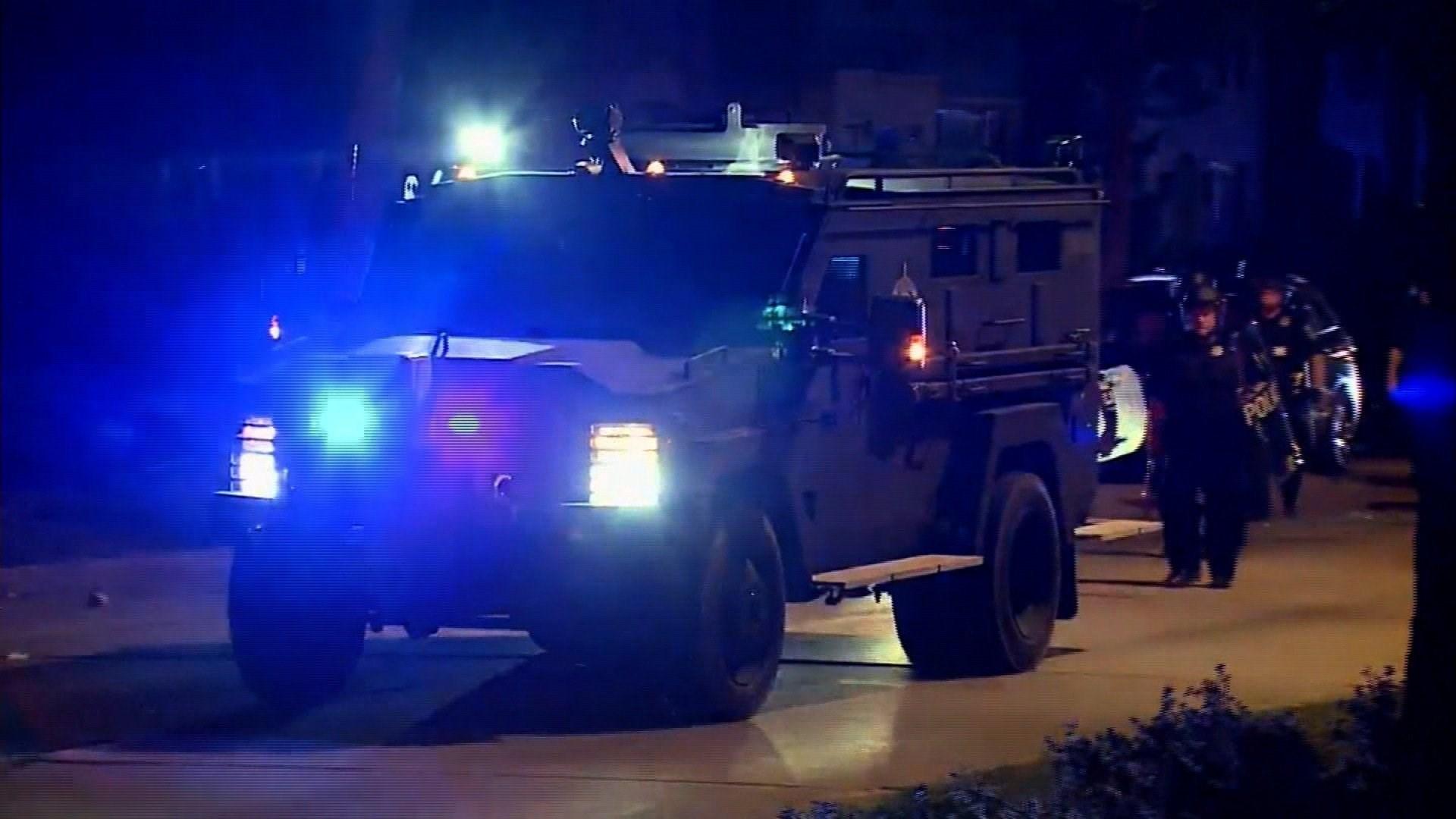 (CNN) -- After a night of violent protests, tensions remained high in Milwaukee as residents gathered Sunday to mourn an armed man shot to death by police.

Family and friends of Sylville Smith, 23, held a candlelight vigil at the site of Saturday's shooting in a residential area of North Milwaukee.

The shooting triggered unrest in the city's north side Saturday night as protesters torched businesses and threw rocks at officers. Four officers were injured and 17 people were arrested, Mayor Tom Barrett said.

Smith's sister, Sherelle Smith, urged protesters to take the violence elsewhere, sobbing as she lamented that she would never be able to again hug her brother.

"Take that s*** to the suburbs. Burn that s*** down," Smith said. "You all want to hurt somebody, take that further out. Don't bring it here."

Another sister, Kimberly Neal, remembered a brother who "kept it real," a high school graduate who played basketball, a contrast to "the man with a lengthy arrest record" described by police.

Police body camera footage showed Smith holding a handgun during the encounter, Barrett said at a Sunday news conference. Police said the unidentified officer shot Smith after he failed to comply with orders to put his gun down. His gun was loaded with 23 rounds, more than the officer was carrying.

"He should have been tased, if anything," Neal said. "We want everybody to feel our pain."

At one point, the crowd chanted "ready for war," followed by a a chant of "peace, peace, peace."

Meanwhile, another group of about 100 gathered at the park near a BP gas station that was burned during Saturday's protests. Crowds ebbed and flowed at the station throughout Sunday; as night fell, community and church leaders led a prayer circle and spoke of a community that needs healing from ongoing "racism, injustices and oppression."

The incident began when a pair of police officers stopped Smith and another person in a car on Saturday about 3:30 p.m., police said. The men fled the car and the officers followed, shooting Smith in the arm and chest when he failed to put his gun down, Barrett said.

The handgun, along with 500 rounds of ammunition, were stolen during a burglary in nearby Waukesha in March, police said.

Smith died at the scene, and the officer who fired the fatal shots was not injured. The officer is 24 years old and has six years of service with the Milwaukee Police Department -- three as an officer. He will be placed on administrative duty during an investigation.

The shooting occurred near the location of an August 9 double homicide in which a man was shot dead and another was fatally stabbed, police said.

City Alderman Khalif Rainey said the area has been a "powder keg" for potential violence throughout the summer.

"What happened tonight may not have been right and I am not justifying that but no one can deny the fact that there are problems, racial problems in Milwaukee, Wisconsin, that need to be rectified," Rainey said. "This community of Milwaukee, Wisconsin, has become the worst place to live for African-Americans in the entire country."

Rainey said Saturday's violence was a byproduct of inequities, injustice, unemployment and under-education.

"Something has to be done to address these issues," he said. "The black people of Milwaukee are tired; they are tired of living under this oppression, this is their life."

As the chaos escalated Saturday, the mayor pleaded with protesters to end their demonstrations.

"I know this neighborhood very, very well. And there are a lot of really really good people who live in this area -- in the Sherman Park area, who can't stand this violence."

The National Guard was activated but it will not be deployed unless authorized by police Chief Edward Flynn, Barrett said. By state law, the Wisconsin Department of Justice will lead the investigation.

"Last night was unlike anything I've seen. I hope I never see it again," Barrett said Sunday.

"A young man lost his life yesterday afternoon. And, no matter what the circumstances, his family must be hurting."

Editor's Note: An earlier version of this story mischaracterized what the sister of Sylville Smith was trying to convey. She was calling for peace in her community, urging protesters to go elsewhere.

CNN's Ana Cabrera reported from Milwaukee, and Joe Sutton and Ryan Young in Atlanta contributed to this report.