Te'o not drafted in round 1, Eifert to Bengals 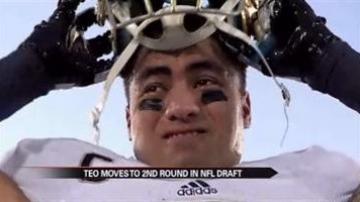 NEW YORK CITY — Round one of the 2013 NFL draft is in the books. Tight end Tyler Eifert was drafted by the Cincinnati Bengals. And Notre Dame standout Manti Te'o did not get drafted.

Locally, many were surprised by Te'o not going in the first round.

Some felt the girlfriend hoax might have hurt his standing in the draft.

Others think it had more to do with his performance in the National Championship game against Alabama. In that game, the Irish lost 42 to 14.

There is also his NFL Combine performance to consider where he ran a 4.82 second 40-yard dash. Which some say is not fast enough for an NFL linebacker.

Those numbers aside, he still helped lead Notre Dame to an undefeated regular season.

And because of that, many students here are disappointed about the first round of the NFL draft.

The NFL draft will continue Friday and will run through the weekend.