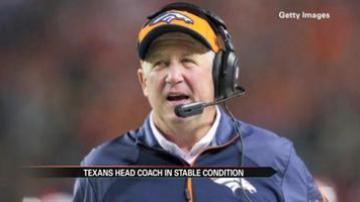 INDIANAPOLIS -- The head coach for the Houston Texans is in stable condition after he collapsed on the field during Sunday night's game against the Colts.

Video shows the coach fall to his knees on the sidelines.

The team is saying he did not suffer a heart attack.

Doctors are still working to find out what exactly happened.

Colts players said after the game they were pulling for the coach.

"Hopefully he's gonna be all right. I know he's a great football man and great person and great win but all our thoughts and our prayers are with him," said Colts Quarterback Andrew Luck.