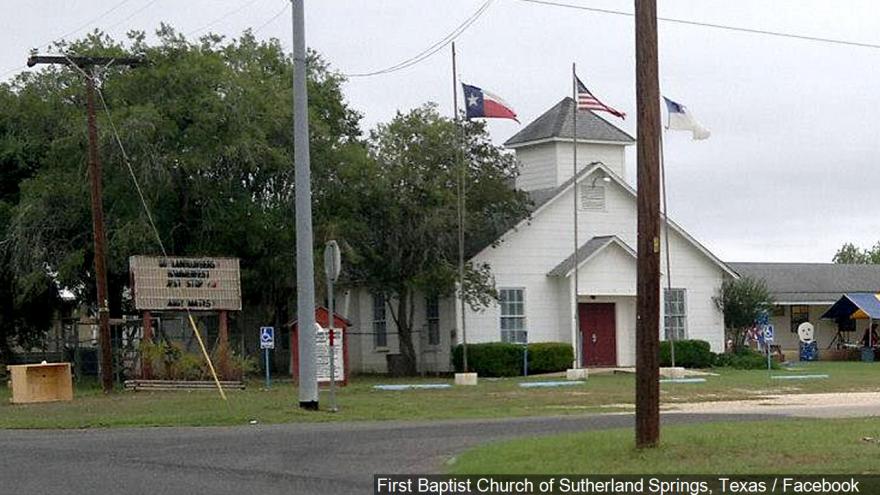 (CNN) -- First Baptist Church of Sutherland Springs held its first Sunday service since a gunman killed 25 people and an unborn child in its sanctuary one week ago, in the deadliest mass shooting in Texas history.

Sunday's service was held just a few blocks away from the church beneath a white tent on a baseball field, closely guarded by Texas Department of Public Safety agents, sheriff's deputies and emergency management officers.

"We have the power to choose, and, rather than choose darkness, like that young man did that day, I say we choose life," said Pastor Frank Pomeroy, whose 14-year-old daughter was among those killed in last week's shooting.

Pomeroy spoke to attendees who filled 500 seats in the makeshift sanctuary, with many having to stand in the back. They faced a small podium for Sunday's speakers, including Texas Sen. John Cornyn, and a wooden cross enveloped in white lights.

"Victory has a price," Pomeroy told those gathered. "You cannot be victorious in battle without being wounded in battle."

At one point, Pomeroy began to break down while speaking.

"I know everyone who lost their life that day," he said, "some of which were my best friends, and my daughter, and I guarantee without any shadow of a doubt they are dancing with Jesus today. God gets the glory."

"It's clear they're people of deep faith," Cornyn said of the congregation in an impromptu press conference following the service, which was organized by pastors and churches from around the area. "And that's what sustains them and gives them hope, even during dark times like this."

Cornyn spoke highly of Pomeroy and his faith, which endures despite having suffered his own tragic loss.

"I saw him standing there at the front of the church, comforting others," Cornyn said. "It's remarkable, but it's a testament to their faith and their compassion for others during this very difficult time."

People from around the state and distant corners of the country traveled to show their support for the small Texas community, home to about 600 residents. One man drove from Dallas, while another couple told CNN they drove from North Carolina.

The church's services were typically attended by no more than several dozen people, who gathered within the church's white walls, singing hymns led by a small worship band. But on Sunday, the number of churchgoers exceeded the entire population of Sutherland Springs.

The church announced on Saturday that the sanctuary would be open to the public on Sunday evening, having been "transformed into a beautiful memorial that celebrates and pays tribute to the lives that were lost."

"I want everyone that walks in there to know that the people who died lived for their Lord and savior, and would want them to live as well," Pomeroy said Sunday afternoon.

Next Sunday's church service will return to the sanctuary where last week's attack was carried out, and Sunday school classes will resume, former associate pastor Mark Collins announced at the end of the service.