Texas family swept away in flood: 'They went to heaven holding hands' 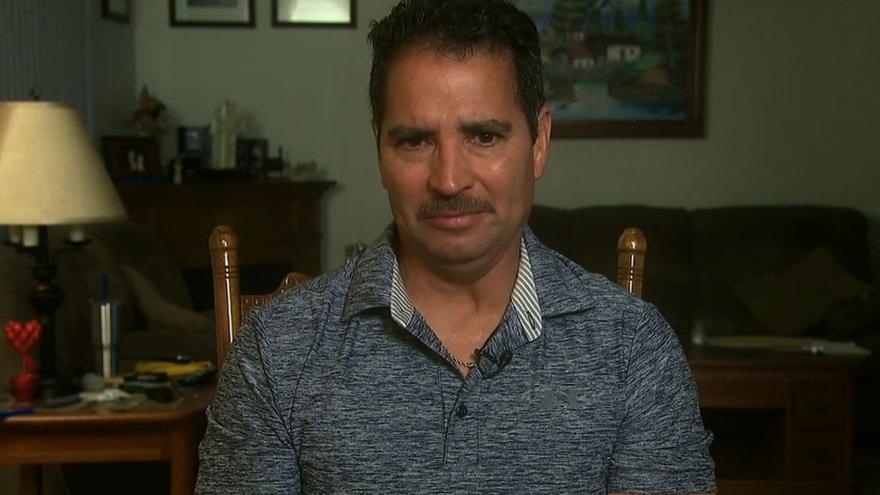 (CNN) -- As his brother tells it, Sammy Saldivar tried his best to maneuver around Harvey's floodwaters.

Sammy packed his elderly parents and their four great-grandchildren into a van as water rose around their northeast Texas home on Sunday.

He wanted to turn around as he approached a waterlogged bridge over Greens Bayou. But his father yelled at him to keep going, his brother, Ric Saldivar, said. Even at 84, patriarch Manuel Saldivar was still demanding. The way they were raised, "Dad tells you to do something, you do it," Ric Saldivar said.

Sammy made it across the bridge only to encounter a dip in the road on the other side, Ric Saldivar said, recalling what his brother told him. Sammy lost control and the van went nose-first into the bayou with his parents and the four children, ages 6 to 16, trapped inside.

Sammy managed to wriggle out of his seat belt and through the driver's side window. He made his way to a branch in the rushing water and held on for his life.

The water was so deep the van bobbed up and down. "He could hear the kids screaming and crying, trying to get out of the van," Ric Saldivar told CNN's Erin Burnett.

Sammy yelled out to them to go to the back of the van and open the door, but they never made it. The van plunged into the water as Sammy watched.

Ric Saldivar said the Harris County Sheriff's Office told him his brother was stuck in the water for 45 minutes when they found him. As they pulled him from the water he kept yelling "the van's down there, the van's down," but by then it had disappeared.

They still don't know where the van is, whether the current carried it away or if it sank close to where it went in. They'll have to wait for the storms to pass to look for it.

For now, all the Saldivar family can do is grieve and comfort their surviving relative.

"He's still blaming himself," Ric Saldivar said. "He was trying to do the right thing to get them out of the flood ... and it just happened."

Sammy had recently relocated from Missouri to live with his aging parents, who both had Alzheimer's, his brother said. He was with them the morning flooding began in their neighborhood.

Ric Saldivar called his brother and told him to bring the family members to his house on higher ground. Sammy stopped at another relative's home to pick up Devy, 16, Dominic, 14, Xavier, 8, and 6-year-old Daisy.

The children were the center of the family's universe, their grandmother, Virginia Saldivar, told CNN's John Berman. She lived across the street from them and saw them every day.

"These were our babies," she said. "It's unbelievable. A nightmare we can't wake up from."

Daisy, the youngest, was always hamming it up, so much so you couldn't help but laugh along with her, Ric Saldivar said. He tears up talking about her. He wishes he could have spent more time with her.

Belia, 81, and Manuel Saldivar would have celebrated their 60th wedding anniversary in October. Ric Saldivar didn't think they had much time left.

Despite the ravages of Alzheimer's they were always together. One minute, they'd be fighting "like they never fought before," and 10 minutes later they'd be hugging and kissing and holding hands, he said.

Sammy told his brother their parents were holding hands as they rode in the car. It brings Ric Saldivar a small measure of comfort.

"I can already imagine Dad holding Mom's hand real tight as the water rushed in," he said. "I know they went to heaven holding hands."