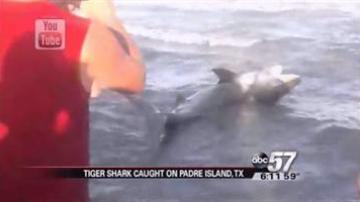 SAN PADRE, Texas — An angler on a Texas beach got the catch of the day.

And it's likely the largest catch of his life.

It took him almost four hours to reel in a 12 foot tiger shark.

The shark was so strong and heavy that he was unable to haul it in by himself.  He had to get help from a team of nearby anglers to help reel in the shark.

At one point, the angler was so exhausted that he had someone bring him a lawn chair so he could carry on.