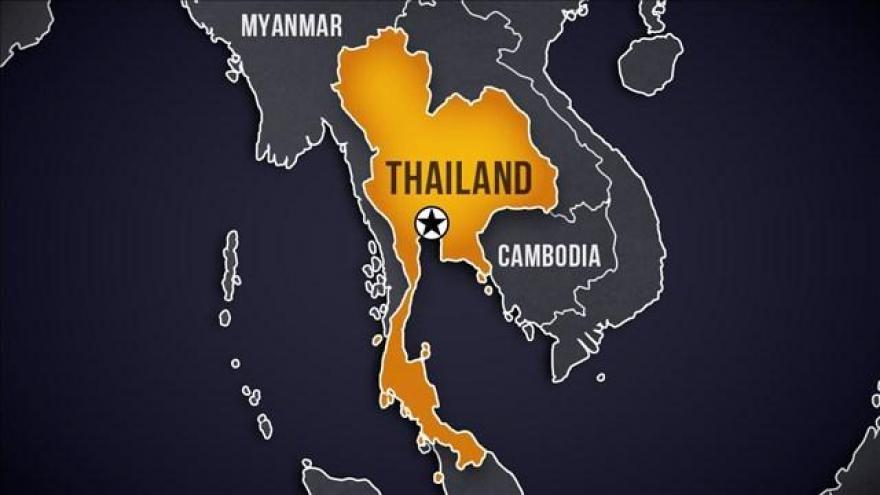 (CNN) -- A sea of black-clad mourners in Bangkok said a final goodbye to their beloved monarch during a funeral that climaxed with the late king's son and successor lighting a pyre built to resemble the sacred center of the Hindu universe.

Massive crowds gathered in the Thai capital on Thursday to observe the pomp and circumstance on day two of the country's elaborate five-day funeral for King Bhumibol Adulyadej, who ruled the country for 70 years.

The King's body was transported in a procession from the Grand Palace, where it was lying in state, to Sanam Luang, the site of the royal crematorium, which was built for the occasion. The cremation of the late monarch took place in private with family members attending, according to Lt. Gen. Sansern Kaewkumnerd, a government spokesman.

Mourners dressed in dark colors stood in stark contrast to the gold symbolic urn that was transported alongside soldiers dressed in red and white. Some stood in long lines to lay ceremonial sandalwood flowers that were later burned in a ceremony at the time of the king's cremation.

The ceremony for the man who was once the world's longest reigning monarch began late Wednesday, just over one year since he died at age 88 on October 13, 2016.

Also known as Rama IX -- a reference to his lineage stretching from Rama I, the founder of the Chakri dynasty -- the King commanded great love and respect in Thailand.

"He's the dad," Saichart Siwannathong said. "The best people and my idol. My hero. My everything."

Before the ceremony, Thais slept in the streets to reserve the best vantage points for the funeral procession, which culminated with his cremation at the royal crematorium, a three-tier, 50-meter (165-foot) high golden funeral pyre.

Thousands came for just a chance to be close to a man who helped steer the country through coups and chaos. Despite the throngs, people appeared to be calm and organized.

Jirapa Kaewin traveled to Bangkok with her twin 18-year-old daughters and had been in line since midnight. "At first we thought we might not come because around my home there is an event organized for the King," she said, "but I thought, this is once in a lifetime, so we have to come."

Kaewin is from the neighboring province of Samut Prakan, where she works at a cosmetics company.

"I wanted to come earlier but had to work yesterday," she said. "We tried to get as close as possible."

Many Thais considered the event too special to miss.

"I'm here today because it's an important day," Yanisa Sonjai, 24, said during the procession. "We would like to be as close as possible to send him back to the heavens."

"I believe everyone doesn't want this day, but we have to accept that it's the time that our king has to go back to the heavens. He has dedicated his life to working really hard for us. He's still in our heart."

Thursday was declared a public holiday to allow Thais the opportunity to pay their final respects during what an official guide said "will be one of the most touching and elaborate cremation ceremonies ever seen in Thailand."

Three billion Thai baht ($90 million) was budgeted for the funeral, the biggest in living memory.

Banks and shops closed across the country and the nation's police force -- some 230,000 officers -- were on duty to contain the crowds.

How Thais are mourning the death of their king

The King was immensely popular during his reign. He was seen as a leader who skillfully charted a course that put the monarchy at the center of Thai society, acting as a force for community and tradition even as the country lurched between political crises and more than a dozen military coups, both attempted and successful.

Bhumibol reigned over more than 20 prime ministers and many constitutional changes. He also helped the country navigate the disruptive effects of the Vietnam War during the 1960s and '70s.

He acceded to the throne in 1946 in the aftermath of Thailand's occupation by Japan during World War II.

For most Thais, he is the only monarch they have ever known, and before his death, analysts expressed concern that his passing would remove a vital point of unity in an increasingly divided country.

His portrait is hung adorned with marigolds everywhere from Bangkok office lobbies to the poorest of rural homes.

As Thailand says goodbye to its king, what can Bangkok travelers expect?

Late Thursday night, Bhumibol's son and successor, King Rama X or King Maha Vajiralongkorn Bodindradebayavarangkun, capped the year of mourning with the lighting of the pyre, which was built to resemble the sacred center of the Hindu universe, Mount Meru.

While Thailand is predominantly Buddhist, many elements of the funeral draw on Hindu traditions.

In addition to religious references, the artworks depict a variety of real-life scenes and figures, such as infrastructure projects built during Bhumibol's reign and his two favorite dogs, Tongdaeng and Jo Cho.

Those outside the capital will have the opportunity to pay their respects as well.

As many as 85 replicas of the royal crematorium have been constructed -- one for each of Thailand's 76 provinces and nine for the special administrative region of Bangkok.

More than 500 statues, on which sculptors have been working daily for almost a year, have been created for ceremonies around the country; some of these statues will adorn the intricate tower.

In addition, more than 800 sites have been designated across the country where subjects will be able to present flowers carved from sandalwood, a traditional tribute to a deceased monarch.

Correction: An earlier version of this report referred to Bhumibol's son and successor, King Rama X or King Maha Vajiralongkorn Bodindradebayavarangkun, as King Rama V. This error has since been corrected.