Thankful for a kept promise 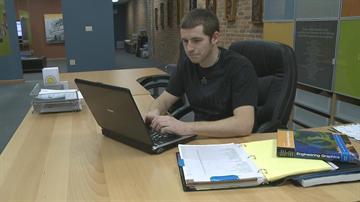 BENTON HARBOR, Mich. -  This Thanksgiving is a bit different for Preston Nickell. “This year is definitely one of those years when people ask me, I say ‘Wow, I’m thankful for a lot,” he said. Like many other 19-year-olds Nickell is going to school, it’s the end of his first full semester at Lake Michigan college and he supports himself.

Unlike other kids his age, Nickell also supports someone else, his 3-year-old daughter Estella Marie.” She’s everything in yourself that you’d want to be,” said Nickell. Nickell is a 2011 graduate of Countryside Academy charter school in Benton Harbor. His girlfriend had Estella when he was 16. Since, she has since been out of the picture and Nickell is the sole provider for his daughter.
When Nickell graduated there were some tough decisions to make. “Me worrying about getting a job or going to college,” he said. “That’s what it was boiling down to.” Nickell caught a lucky break.
In his senior year of high school the ‘Benton Harbor Promise’ was announced at his school. The ‘Promise’ gives all graduates of Benton Harbor area schools a free two-year college education at any school in Michigan. The idea of the program is to better educate Benton Harbor graduates and make the area a more sustainable place.
“No doubt about it without it, no doubt in my mind I would not be in college right now,” said Nickell. He says thanks to this education the future is bright for both himself and the love of his life, his daughter Estella. “I’m lucky, I’m really blessed where I am right now.” He said.
This semester, 80 Benton Harbor graduates were enrolled under the ‘Promise’ in six different colleges around Michigan.
Share this article: