The birth of Disney's Magic Kingdom 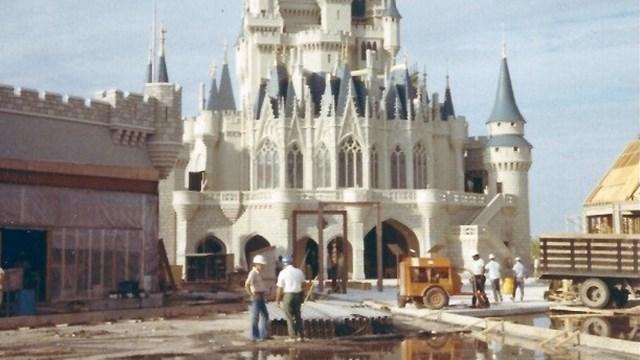 (CNN) -- Kelly Wise Valdes didn't think twice about visiting the Magic Kingdom when she was a child.

Her grandfather, Chester "Chet" Wise, helped build the Disney park starting in 1969 and continued to work there until he retired in the late 1980s. Her grandmother, Elizabeth Wise, also worked at the park. They lived right by it until Chet Wise died in 2002, so Valdes visited often.

After her grandmother died in 2012, Valdes was given a box of pictures that she didn't examine until she was packing to move last March.

What she found was a treasure trove: her grandfather had taken dozens of pictures of the Magic Kingdom under construction, often from high above. Valdes told CNN the story of these magical pictures.

What was your grandfather's job?

My grandfather, Chet Wise, was a master craftsman and woodworker who handcrafted many of the architectural details of the Magic Kingdom in Orlando during its construction. He was a patient perfectionist and meticulous in his craftsmanship.

Walt Disney had been very particular in the details of everything in the original Disneyland Park in California, and although Disney had already passed away prior to the Magic Kingdom's opening, the legacy continued.

Thousands of construction workers were there during the Magic Kingdom construction. Disney kept a small handful of these master craftsmen and made them full-time Disney employees, and my grandfather was one of the chosen few.

My grandmother, Betty Wise, also worked at the Magic Kingdom as one of the executive administrative assistants who helped set up the executive offices. My grandparents worked there until their retirement in the mid-1980s. They belonged to the "Golden Ears Club," a group of active Disney retirees.

Why did they live on Disney property?

My grandparents were one of 10 families that actually lived on Disney property, because Disney needed a handful of residents in order to incorporate Lake Buena Vista as an actual city back in the early 1970s.

These employees were handpicked, and my grandparents lived on Disney property until my grandfather passed away. It was so close to the Magic Kingdom that I could see fireworks from their front yard when I was a kid.

What was visiting Disney like for you as a child?

I was born in 1967 and raised in Jacksonville, about 130 miles from Orlando, and my earliest memories of my grandparents always included Disney. I never considered it unusual that they lived in a small community and they were one of a few Disney citizens. It just seemed like a normal thing to me.

I remember running through the Magic Kingdom towards Space Mountain and wanting an autograph from Mickey Mouse. My grandfather would point out things along the way. "I built this. I made that."

Why did your grandfather take these pictures?

I believe that many of these pictures were specific to the architectural things he personally worked on. I remember him telling us that he crafted the detailed and intricate woodwork around the windows in the train station at the front of the park. He also did all the elaborate woodworking for windows on Main Street, Cinderella's Castle and Pinocchio's Village. He hand-built everything.

Why are these pictures special?

I think there were many stock photos that were staged and were released by Disney that depict the construction during that time period. But there may not be a great deal of amateur, candid photographs from this time. So many people kept repeating that they had never seen pictures like these before.

My father and I aren't sure that the construction crews were allowed to take pictures, but my grandfather was a little mischievous. And if you think of the logistics of it, it wouldn't be easy. In 1971, people didn't have small cell phone cameras. My grandfather had a large, heavy 35-millimeter camera, which I have, and he was working high on scaffolding. Some of his pictures from up high show the vastness of the whole construction site.