The controversy behind this year's Notre Dame Laetare Medal recipients 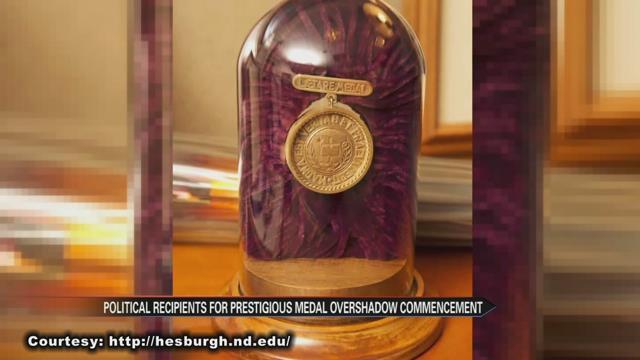 Notre Dame awarded its famed Laetare Medal at commencement Sunday, but not before dealing with weeks of criticism over the recipients.

“I’ve worked really hard at Notre Dame to try and help…guide the university to preserve its Catholic identity and the fact that they are giving the Laetare Medal to Joe Biden and John Boehner is really disappointing to me,” Notre Dame Senior Alexandra DeSanctis said.

DeSanctis is one of a few students who decided to skip Sunday’s commencement because of the medal recipients.

“I’d rather just not be a part of it and celebrate on my own,” she said.

Her feelings are part of a larger discussion about Notre Dame’s Laetare Medal – America’s highest Catholic honor. It’s awarded each year to an American Catholic, and this year’s recipients are the vice president and the former house speaker.

“We aren’t awarding them the Laetare Medal for any particular political position they have,” Notre Dame University Spokesman Dennis Brown said. “But instead, for their ability through many, many years, to work hand-in-hand with their opponents on the other side of the aisle.”

Past recipients include actors, musicians, priests and scholars, but some students feel the school is politicizing the medal. Dozens of students attended a prayer service protest in April to voice their concerns.

“Graduation is really supposed to be about the students and I think by giving this award to people who are very contentious and controversial, they’ve taken the focus away in a way that is unfair to us and to our families,” DeSanctis said.

But not all students feel that way.

“In a time where there’s been so much hatred and political discourse in our country right now, I’m actually pretty proud of the university, that it’s decided to award both Boehner and Biden a medal,” Notre Dame Senior John King said.

Biden’s support for same-sex marriage and women’s rights – which could include abortion – is at the forefront of the debate, while Boehner’s support of the death penalty frustrates critics.

Fort Wayne-South Bend area bishop Kevin Rhoades has also spoken out against this year’s recipients, saying in a statement, “I realize that Notre Dame is trying to separate or distinguish the conferral of the Laetare Medal upon the recipients from their positions on public policies…I do not think this realistically possible or intellectually coherent.”

At issue is the possibility that Notre Dame is using its highest religious honor as a political chess piece.

“It does seem to be a political message, for sure, rather than a religious message that the university is sending with these particular recipients this year,” IU South Bend Political Science Professor Elizabeth Bennion said.

Bennion said Jenkins is in an interesting position because he represents both Catholics and an internationally-recognized Catholic research university, so his school often has the opportunity to deliver a message to the world.

Bennion also said Jenkins’ views are similar to those of Pope Francis.

“[They share] a desire to reach more across difference, to speak to people who disagree with you in a respectable way,” Bennion said. “And so we see that, both with Pope Francis and with Father Jenkins, who sees the need for such debate and dialogue and continual challenges as part of what a university does, this constant inquiry.”

She added, “I think this is a consistent position for Father Jenkins to take and to want to challenge Catholics throughout the United States, to think about the role of Catholic research institutions, and the fact that it is a bit different than, in his position as the head of a university, than it would be if he was the head of a parish or the head of a diocese.”

Biden and Boehner were warmly received in Sunday’s ceremony, where the political message behind the Laetare Medal was spotlighted by Jenkins, the vice president and the former house speaker.