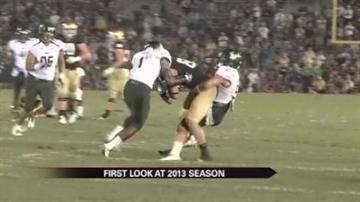 SOUTH BEND, Ind.-- The Fighting Irish will officially begin their season on August 5th as the team heads to Shiloh Park for training camp.

Several of the veteran players spoke to the media about their goals for the season.

Jones said, “I just want to lead the team, to be that guy they can look to in times of adversity to make those clutch plays when they are needed. And to be that guy that the teams expecting me to be, being a four year starter.”

Jones said he is hoping this season will help him get into the NFL and fulfill his dreams of winning a BCS National Championship.

Louis Nix III said, “Our focus is getting this degree, getting a great education from Notre Dame, and getting to a National Championship and winning it.”

Tommy Rees said he has to block out the media and outside distractions to stay focused.

Rees said, “Block a lot of things out, there’s a lot of preparation and a lot of things that go on week to week, and it’s just all about balancing your time and making sure you are doing the right thing.”