The government's small business loan money is gone. Now what? 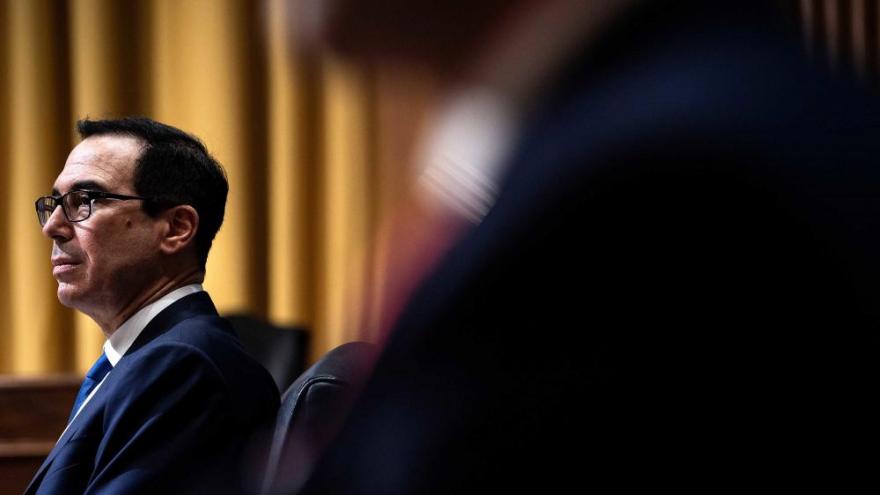 US Secretary of the Treasury Steven Mnuchin attends a hearing of the Senate Finance Committee. The Small Business Association officially ran out of money for the Paycheck Protection Program, according to a message for lenders posted on the administration's website.

On Thursday morning, the $349 billion emergency small business lending program officially tapped out. The Small Business Association officially ran out of money for the Paycheck Protection Program, according to a message for lenders posted on the administration's website.

Negotiations on Capitol Hill have yet to generate a path forward to replenish the money, all as the US economy continues to stagger under the pressure of near-nationwide closures.

Bottom line: Treasury Secretary Steven Mnuchin and Democrats will reconvene Thursday to try and reach agreement on a package that will immediately increase funding for the program. But they aren't there yet and this is no longer a theoretical exercise. The program had, and continues to have, glitches and difficulties. But it also rolled through $349 billion in less than two weeks. That's how urgent it is for small business owners. That's how desperate, how flat catastrophic, the economic situation is amid the coronavirus pandemic.

The Senate meets for a pro forma session at 3 p.m. ET. A deal needs to be reached before then for the money to have any opportunity to be replenished this week. Democrats and the Treasury Department are expected to continue negotiations behind closed doors

As of 6:30 a.m. ET, $338 billion in loans have been approved, per an official with the Small Business Administration. By the 10 a.m. ET hour, the agency had posted a message on its website.

"The SBA is currently unable to accept new applications for the Paycheck Protection Program based on available appropriations funding," the notice read. "Similarly, we are unable to enroll new PPP lenders at this time."

What it means: The Small Business Administration sent a notice to banks Wednesday night making clear the allocated funds for the program were on the verge of being exhausted, according to a copy sent to CNN.

"Once the authorization limit is reached, SBA will not be able to accept any new applications for the Paycheck Protection Program," the update to lenders states. Also of note: "SBA is unable to maintain a queue for PPP applications."

This is a first-come-first-serve program. Once the funding runs out, the queue of applications can no longer be maintained. That has repercussions for when Congress does actually reload the funds.

There is still a legislative standoff between Republicans and Democrats on how to move forward. While early conversations included some talk about increasing money for the Small Business Administration loan program and for hospitals at the same time, there are some real complications with making this package any bigger than SBA loans.

As one aide said, "when you are operating with no margin of error, you have to get everyone's support. It's that simple."

Negotiating more money for hospitals opens up a can of worms about how that money is going to be spent. Which states are going to get it? And how do you prioritize them? New York has been at the epicenter coronavirus, but hospitals all over the country have moved to stop elective surgeries, a major source of their revenue streams. That is as true for a rural hospital in South Dakota or Montana as it is for a hospital in New York. And rural hospitals are already operating on thinner profit margins.

Aides involved in the talks don't expect an agreement on Thursday, given those factors. But everyone involved is cognizant of the urgency -- and potential political backlash for letting the program lapse. That may drive things.

Deadlines are exceedingly important on Capitol Hill. They drive negotiations, help secure agreement and force compromise. There's a concern that if a deal isn't reached today, not only will the program go without replenished funds through the weekend, but possibly on through the rest of the month. That's a pessimistic view of things, but it's a concern several people involved with the program have raised to CNN in the last 24 hours.

The grumbling from Republicans over Mnuchin's negotiations with Democrats isn't new, but It's certainly more prevalent right now. GOP leaders have held the line on keeping this bill limited to just SBA funding from the start. Mnuchin is engaged in talks with Democrats. That alone has drawn criticism. But there's also concern about what kind of deal he'd be willing to strike with Democrats.

"This isn't just a Mnuchin-Dem deal," one GOP aide told me. "Every single one of our guys has to sign off on this for it to pass. He can't forget that."

Mnuchin has been the dealmaker for the Trump administration over the last year. He has the relationships with Democratic congressional leaders -- and it's a good working relationship by all accounts -- and he's been able to lock in agreements on massive issues, from raising the debt ceiling and a budget and spending deal agreement to the largest emergency economic relief package in the history of the country. But the dynamics on these talks specifically is different.

The point here: there's no margin for error when the only way legislation can move through the Senate is through unanimous consent. Any deal Mnuchin strikes with Democrats must have the sign off of Senate Republicans. And Senate Republicans are not in the mood to deal right now.

"The deal making comes in phase four," the aide said. "This is just about getting emergency funds out the door."

What you'll see Thursday: There's another pro-forma session this afternoon, but if no agreement is reached, aides say the plan is not for Senate Majority Leader Mitch McConnell to ask again for more money for SBA. Instead, expect the Kentucky Republican to set up future pro-forma sessions and potentially handle other administrative business (aka: moving the of folks who were slated to come up next week if the Senate was coming back to Washington.)

Why not put Democrats on the spot again? Part of the complexity for McConnell here is that Mnuchin is doing much of the negotiating directly with Democrats. Schumer has touted repeatedly that he's having calls with the treasury secretary and Democratic staff from the House and Senate had a meeting with Treasury staff Wednesday. Those negotiations have largely taken center stage and providing room for those conversations is critical if a final deal is going to come together.

If you are reading the tea leaves: HouseSpeaker Nancy Pelosi's statement Wednesday didn't exactly reveal that Democrats are anywhere close to reaching a deal with Republicans on money for the Small Business Administration. Pelosi's statement said "as has been clear since last week, Republicans' bill which fails to address these critical issues cannot get unanimous consent in the House."

But she also seemed to ask for less than she did the previous week, saying she wanted more money for hospitals and local governments and assurances that small businesses and others who were struggling to access the PPP loans got help.

Pressure is coming from all directions: What has changed over the last few days is that the outside groups are calling -- in a united front-- for Congress to swiftly approve this money. While the same groups were calling out early issues with the loan program, now they are desperate for their members to get money they need and collectively lobbying Congress to make it happen.