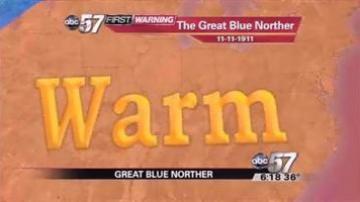 It was an atypical November weekend from the start.

Little did our ancestors know that was all about to change!  A powerful cold front was racing across the country…behind it a frigid air mass.

The Great Blue Norther, as it was called, getting its name from the dark bluish clouds, spawned nine tornadoes in Michigan, Illinois, and Indiana leaving two dead in Michigan, and injuring five in Indiana.  An F3 roared through Lake and Porter counties, but lifted before reaching Michigan City.

The temperature drop observed with the passage of the front has not been equaled in the last one hundred years.

Colombia, Missouri dropped 38 degrees in one hour!  Their high reached 82° before plummeting down to a low of 13°, a change of 69° in one day.

Many of the records set from this storm still stand.  Thankfully, these storms only happen about once every century, and our weather on 11-11-2011 has been much quieter!