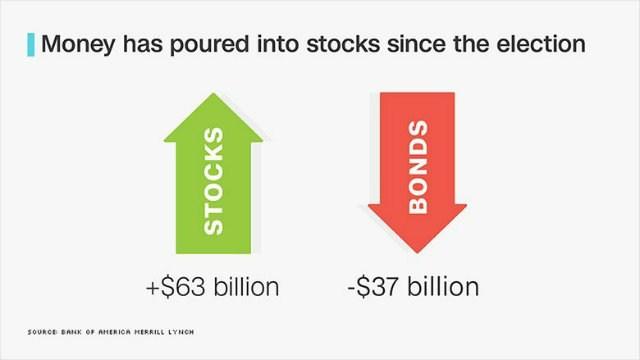 NEW YORK (CNNMoney) -- Stocks are on a lot of people's holiday shopping lists.

A whopping $63 billion has poured into U.S. stock funds since Donald Trump won the presidential election, according to the latest tally by Bank of America Merrill Lynch.

"It caught a lot of investors by surprise," says Brian Leung, vice president of global investment strategy at the bank.

The week after the election turned out to be one of the biggest of all time for money flowing into U.S. stocks. But the buying didn't end there. Last week also made the top 10, according to Bank of America Merrill Lynch.

Leung says not all investors were "nimble enough" or "heroic enough" to get into stocks right after the election. He thinks they are jumping in now for fear of missing out on even more gains.

Stocks rising because of too much hope?

Many Wall Street banks predict stocks will go even higher in 2017, although most forecast only modest gains from the market's record highs.

So is now a great time to buy stocks? Not everyone is convinced.

Hedge fund billionaire Carl Icahn, a friend and supporter of Trump's, told CNN that the stock market has "gone too far."

That was on December 9. The market has only risen more since.

The case for stocks going higher rests on three factors:

A 'great rotation' is taking place

1. Stocks are hot. Bonds are not. Even before Trump won, investors were souring on bonds. Many believe the great bond bubble has finally burst and bonds can only fall in value, especially if the U.S., European and global economies continue to rebound.

Investors have yanked $37 billion from bond funds since the election. Most of that money rotated right into stock funds. This "great rotation" could be a major story in 2017.

2. Optimism about Trump (and Trumponomics): Trump promises an extremely "pro-business" government. He's the CEO of America's 48th-largest private company himself, and many of his Cabinet picks are also CEOs and billionaires.

Trumponomics is all about big tax cuts for individuals and businesses and lower regulations. He also wants an infrastructure spending bill of up to $1 trillion. All that is a sweet melody for markets -- and CEOs. Business confidence is way up. The question for 2017 is whether the gains are priced in or there's more room for stocks to rise.

"A new president tries to do things, but he doesn't have a magic wand," Jeff Gundlach, head of DoubleLine Capital, told investors on a conference call last week.

3. Federal Reserve action (and reaction): The Fed has been a big factor in the historic climb of the stock market since 2009. The Fed has kept interest rates extremely low, causing investors to pour money into risky assets like stocks in an effort to make money.

But now the Fed is starting to raise rates. It hiked them last week and plans three more increases in 2017. Higher interest rates could put the brakes on Trumponomics -- and the stock market upswing. But rate increases also make bonds less attractive.

"Clearly the narrative has unfolded very differently post-election than before," Gundlach said.