The Irish finish 2014 season December 30: a year full of ups and downs 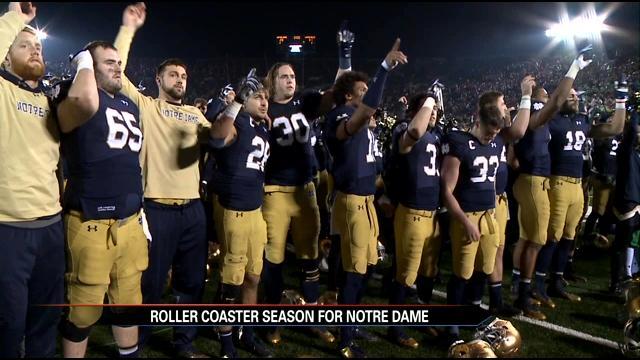 The Fighting Irish just wrapped up their final game of the 2014 season yesterday at the Music City Bowl in Nashville, where they took on the LSU Tigers. This year has been full of ups and downs for Brian Kelly's squad.

The season was supposed to be a promising one.

“Earlier today, we notified the NCAA that we were undertaking an internal investigation of discovered, suspected, academic dishonesty on the part of several students, including four members of our football team,” University of Notre Dame President Father John Jenkins said August 15.

But that promise was nearly crushed before the season even started. Five players were suspended due to academic misconduct.

“Because of potential NCAA violations, the student athletes will be held out of practice and competition until the conclusion of the ongoing investigation,” Jenkins said.

The Irish lost four returning starters to that investigation. But with that, came the hope of potential in a young team.

“We have a lot of inexperienced players playing for us this year and they will get that opportunity playing the toughest schedule in the country,” Head Coach Brian Kelly said August 19.

The Irish faced that opportunity head on with win...

“When it came down to it in the end, we played well. We made plays when plays needed to be made,” Irish offensive lineman Nick Martin said August 30.

“We showed our character, what we want to be on offense and that's electric.” Irish quarterback Everett Golson said August 30.

“Proud of our guys continuing to battle and found a way to win right at the very end,” Kelly said after the October 4 Stanford game.

With six straight wins under their belt, Notre Dame seemed almost unstoppable as they headed to Tallahassee to take on the defending national champions, the Florida State Seminoles.

It was a controversial penalty called with seconds left in the game on fourth down that caused the Irish to come up short.

“At the end of the day we needed to make one last effort and just didn't do enough,” Irish linebacker Joe Schmidt said October 18 after the FSU game.

The play is one Kelly still stands by today.

“We execute that play every day and we do it legally and that's the way we coach it. We don't coach illegal plays,” Kelly said.

It was a disappointing way to lose on a national stage, that set the tone for the rest of the season.

“Five turnovers and a mishandled PAT is the story,” Kelly said November 8.

As a short time and several injuries later, the Irish would lose a frustrating four games in a row.

And Notre Dame would wrap up its regular season 7-5.

“Close losses, difficult losses that I hope that our team will grow from,” Kelly said November 15.

The Irish went on to end the season on a high note at the Music City Bowl in Nashville. They defeated 23rd-ranked LSU with a field goal in the final seconds, 31-28.