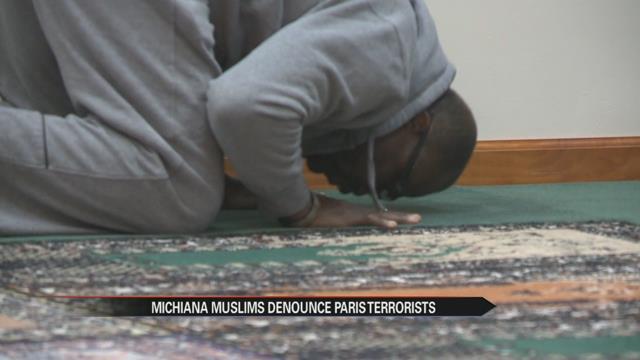 The Islamic Society of Michiana is publicly denouncing the acts of terrorism to hit Paris, France.

Members of the faith say those terrorists do not represent their beliefs.

Former Strasbourg, France native, Khalid Naha shared of few words in French of prayers and encouragement for a country that could use it right now.

“They were just having fun and you have these monsters show up and shoot everybody,” said Naha.

Every member of the mosque agrees.

“This is completely against our faith,” said Mohammad Sirajuddin, Imam of the Islamic Society of Michiana. “American Muslims especially, they should not be associated.”

Instead, they’d rather be associated with their truths.

“Islam gives us the light and the guidance in our day to day life,” said Sirajuddin.

Light and guidance, Naha says does not stray the course of peace.

“In our book god says if you kill one person without any reason, it’s like you killed the whole humanity,” said Naha.

These members also want peace for those fleeing unsafe countries.

So when Governor Mike Pence announced Indiana will suspend resettlement for Syrian refugees, Sirajuddin was disappointed.

“They are fleeing the war, violence and terror in their countries,” said Sirajuddin. “So we should be still welcoming them but at the same time we do have a process to screen them so the bad guys don’t get in.”

And even in the darkest hour their faith still allows them to forgive.

“We pray to God to guide them to the right paths,” said Naha.