The price tags around these marchers are meant to reflect what they say their lives are worth: $1.05 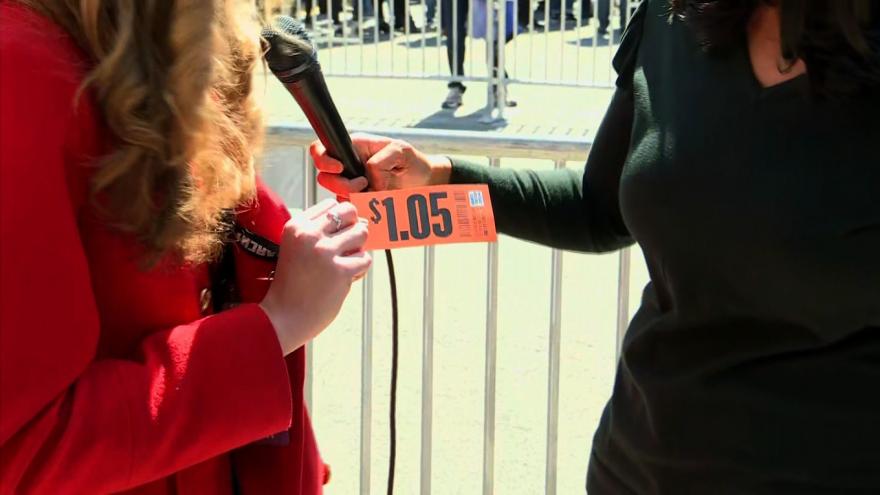 (CNN) -- Marjory Stoneman Douglas students are wearing bright-orange price tags at the March for Our Lives rally. Each says: $1.05.

They're meant to be a jab at Florida Sen. Marco Rubio and the National Rifle Association.

Stoneman Douglas freshman Lauren Hogg put it this way as she showed off the tag at the rally in Washington:

"We took the amount of money that Marco Rubio took from the NRA, and we divided it by every single student in the state of Florida," she said. "So, this is how much we're worth to the Florida government. It's our price tag."

Some Stoneman Douglas students have excoriated the Florida senator for not distancing himself from the NRA since shortly after the February 14 massacre at their school in Parkland, Florida.

"There's money on both sides of every issue in America," Rubio said. "I will always accept the help of anyone who agrees with my agenda."

March organizers hoped to keep pressure on, making the $1.05 tag available on their website and encouraging all marchers to print it out and tie one on.

The tag caught on.

How much Rubio actually benefits from the NRA depends on how you calculate it.

The March for Our Lives website claims Rubio received $3,303,355 from the NRA in his career -- including spending on his behalf (such as TV commercials, print and digital ads or mailings), and donations. It cites an October 2017 New York Times op-ed article, which in turn cites the Center for Responsive Politics.

The march organizers get $1.05 by dividing their dollar figure by 3,140,167 public and private students it says are in Florida.

A Washington Post examination of Federal Election Commission data, however, indicates that as far as donations go, Rubio has received only $4,950 from the NRA in his career, and returned a further $9,900.

Shortly afterward, Rubio released a statement that said, in part:

"I do not agree with all of the solutions they propose, I respect their views and recognize that many Americans support certain gun bans. However, many other Americans do not support a gun ban."