The push for diversity in South Bend 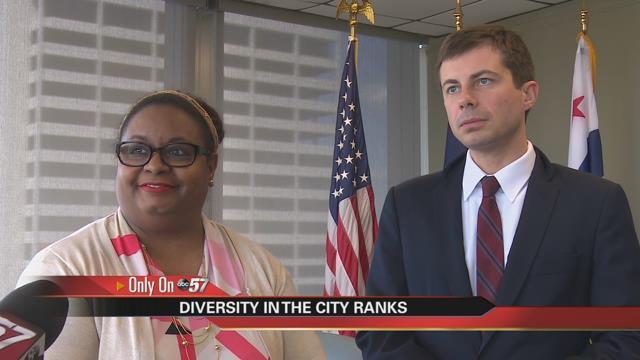 The city of South Bend is turning its attention to providing equal opportunity among its ranks amid allegations of discrimination.

The push for diversity starts with a brand new hire in the County City Building.

Christina Brooks was named the new Diversity and Inclusion Officer on Monday.

She’ll serve as a watchdog for the city’s hiring practices.

But the mayor says the promise of diversity isn’t only her responsibility.

"Until there is not only a reality but also a perception that this is a place that models diversity and inclusion then we have more work to do,” said Mayor Pete Buttigieg.

That’s the tough challenge the mayor promised the city will take on as he introduced the new hire who plans to oversee it.

“There are always challenges in diversity and inclusion, making sure you have an input buy-in from the whole community,” said Brooks.

Brooks will leave behind her duties as a diversity recruiter for University of Notre Dame, to take on a similar role on a larger scale as South Bend’s first Diversity and Inclusion Officer.

A position the mayor has been pushing for since drafting the 2016 budget.

“I really want to make sure that we put some meat on the bones of the executive order that was issued by Mayor Pete back in January and just really build out the plan,” said Brooks.

The city’s common council, though, was split on the new position when they approved the budget.

“My position on that is it takes more than just hiring a minority officer,” said Oliver Davis, District 6 Councilman.

Councilman Davis says the calls for diversity among the ranks haven’t gone unheard.

But he says it’s time to answer them.

“We as city officials need to do all we can to make sure we are open as best we can to every single issue to clear up those muddy waters that are out there when it comes to public trust,” said Councilman Davis.

Muddy waters, like allegations of discrimination against the city’s police department.

They alleged unfair treatment and being passed over for promotions because on their race.

The city says the commission found all to be unfounded except for one, 30 year officer Nathan Cannon.

And he’s now pursuing a lawsuit against the city.

While he can’t comment on pending litigation, Division Chief Jeff Rynearson assured me diversity is a top priority to the future of the department.

“You do want your police department to reflect the communities that they serve, so that’s always a goal,” said Chief Rynearson.

That goal is shared by officials inside the County City Building as well and they believe more work can be done to achieving that goal.

“The better we get at this, the less anybody would ever have any reasons to question the practices or the policies of our city,” said Mayor Buttigieg.