The reason 'Frida,' the trapped little girl, gripped our imagination 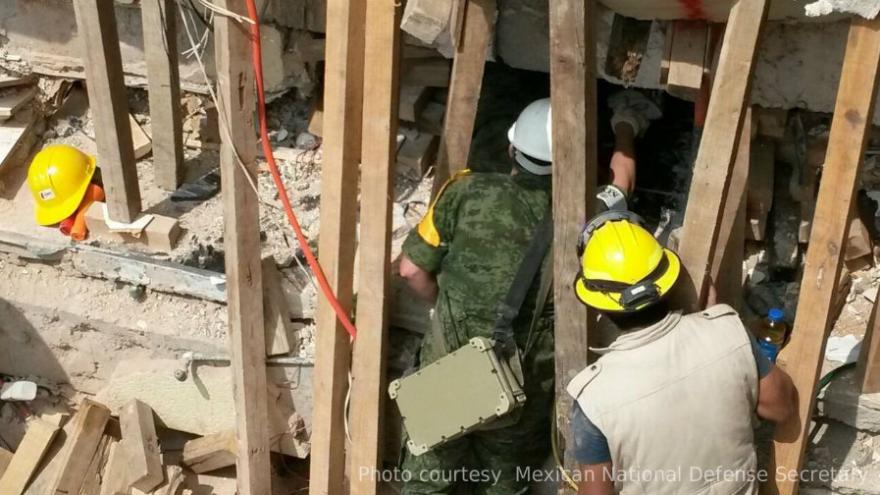 (CNN) -- The drama was palpable. Somewhere, under a collapsed school building in Mexico City, a little girl named Frida Sofia was trapped.

Rescuers scraped through the rubble, racing to set her free. We were riveted.

After a horrific 7.1 magnitude earthquake devastated the capital city, we were all pulling for an uplifting rescue.

The problem was, Frida Sofia didn't exist. That came out two days later, when the Mexican navy said it was sorry for the erroneous information.

It happened during the 1985 Mexico quake as well. Then, as now, a little child trapped in debris gripped the imagination of the nation. He, too, wasn't real.

In both revelations, there was an odd disappointment. The emotional connection with these children had been so strong, the obsession with their plight palpable.

Sociologists call it the "identifiable victim effect." When we're confronted with a tragedy with hundreds or thousands of victims, we often zero in on the plight of one person. It's especially true when that person's a child -- real, or imagined.

In 1968, economist Thomas Schelling wrote that the death of an individual, as opposed to a group, invokes "anxiety and sentiment, guilt and awe, responsibility and religion."

Yet, he continued, "most of this awesomeness disappears when we deal with statistical death."

These words became the cornerstone of the "identifiable victim effect" theory. It's based on a psychological process people employ when the suffering of many, or suffering in the abstract, becomes too hard to understand.

It's also a psychological process that activates our most basic human motivator: Emotion.

"Emotions are mechanisms that compel us to act," says Dan Ariely, an author and behavior economics expert who holds a Ph.D. in cognitive psychology. "Think of it as nature's way to get us to do something."

"And what created emotion is not statistical information about lots of people," he says. "It's the individual and the empathy we feel for them"

How children change the way we think about war

Children in particular are a main focus of this biological switch, because we see them as innocent.

"We can't attribute any blame to them," Ariely says. "It is a question of agency. When we have people that we think don't have agency, then we feel much worse for them and we are much more willing to do things for them."

That's not always a bad thing.

Take Omran Daqneesh, the Syrian boy made famous in 2016 by viral footage from war-torn Aleppo. Hundreds of thousands of Syrians have died since the Syrian civil war began in 2011. Yet, the image of Omran, bloodied and dazed in the back of an ambulance, galvanized the public's interest more than any six-figure statistic could.

Often, these iconic children serve as symbols of a larger struggle -- war, immigration, natural disaster, or in the case of Ryan White, illness. Ryan was diagnosed with AIDS when he was only 13. The year was 1984, a time when HIV/AIDS was widely misunderstood and heavily stigmatized. His journey affected the public so acutely that it inspired legislation around the disease -- a moment of real social progress.

But the intense fascination the public forms around an individual can sometimes invite a similarly disproportional response.

In 1987, "Baby Jessica" fell down a well and instantly became an American legend. Her 58-hour rescue was must-watch TV drama for millions.

There can often be an uncomfortable, reality-TV feel to these kinds of obsessions. Each time a child makes the news for an abduction or a fall down a well, the public's intense interest becomes both a byproduct of the story and a part of the story.

With Baby Jessica's rescue, the modern obsession with endangered children was born. There have been innumerable instances since then.

There's Madeline McCann, a British girl who went missing in 2007. About 800,000 kids go missing each year, according to one often-quoted stat. There's not enough emotional energy in the world to worry about each one equally. So we focus on the ones who're most readily before us.

This can lead to a disproportionate level of attention and aid.

"The kind of things that compel us to act are not necessarily the important things," Ariely says. "In cases where we ask the question of where to give money, the thing that is emotionally compelling, that will be where our focus is."

It was the drama of a specific storyline that pulled people toward -- and made others skeptical of -- the story of Frida Sofia. It's no surprise the narrative was fascinating. Who wouldn't root for, pray for, hope for, a child's survival?

But as the hours wore on, the truth emerged.

The Mexican navy said it had based its information on "technical reports" and on the accounts of civilians and rescuers.

"I offer the Mexican public an apology for the information disseminated this afternoon where I affirmed that I did not have details about a supposed child survivor in this tragedy," Angel Enrique Sarmiento, deputy secretary of the Mexican navy, said.

Immediately, the conversation turned to the story of Monchito, the "ghost boy."

During the Mexico quake of 1985, Monchito's story followed a similar narrative to Frida's.

He was believed to be a 9-year-old boy trapped in the debris of a house. Civilians and rescuers fretted over his rescue, convinced by family accounts and their own senses the boy was just beyond their reach. He was never found.

According to the Spanish newspaper El Pais, a psychologist deemed the incident a product of "collective psychosis."

Crisis and chaos can often scatter reason and push us back to our more basic functions. And emotion, it seems, is the ultimate override.