The right to work debate: possibility versus protection 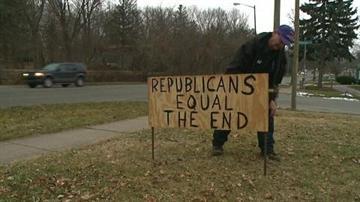 SOUTH BEND, Ind. – Right to work legislation is dividing Hoosiers; many of which are fearful of losing wages, if not jobs, should it become law.

Joe Marozsan has been a union member for years. He makes $17 an hour, pays hundreds of dollars in taxes, and he claims about $15 in union dues every month.

With a medical condition affecting his brain, Marozsan is scared about what may happen if he loses his job, or is forced to take a cut in pay or benefits. "It takes a $17 an hour job for a single person like me to be able to have a beat up car and an apartment; to be able to buy everything I need to survive from day to day," said Marozsan.

Marozsan was the creator of the Republicans equal the end sign that was posted on, and stolen from, the corner of Miami Street and Chippewa Avenue.

In Marozsan’s opinion right to work legislation will open the door for corporate abuse. "If you have a chance to pay me half of what you pay me right now to do the same job, you will, and that's what's going to happen," said Marozsan.

Republicans do not deny that could happen. However, with thousands of people still out of work they want to increase the opportunity the state has for recruiting new, expanding or relocating businesses.

According to Governor Mitch Daniels, the state misses out on about a third of potential opportunities because Indiana does not have a right to work law.

He also claims that we are able to land two thirds of the jobs that we do get the chance to compete for.

According to Daniels Press Secretary, Jan Jankowski, he was referring to new businesses when he used the phrase new jobs transactions.

Given the current economic climate, a record year for business growth is not satisfactory for Daniels or the republicans at the state house.

According to Jankowski, Indiana ranked 6 in the CEO Magazine 2011 Best States for Business Rankings.

Every state above Indiana was a right to work state, and the 17 others were generally near the top. Mississippi is the lowest in the 38 spot.

In sixth place Indiana is the only non right to work state in the top 10. Colorado is the closest at 12.

From 2010 to 2011, Indiana moved up the list 10 spots, all without a right to work law. Both republicans and democrats can use that to their advantage.

Democrats say we don’t need right to work to compete with 90 percent of the country for jobs. Republicans say, with right to work, we could go even higher on that list, maybe even become number one supplanting Texas from first place.

It seems the right to work debate boils down to two simple philosophies.

You are either for it, and want to open up the possibility of competing for every new, expanding, or relocating business opportunity; instead of just two thirds of them.

Or you are against it, and want to protect the union wages, if not jobs, from being undercut by employers seeking a cheaper workforce; of which there is plenty in supply if unemployment numbers are accurate.

No one denies more jobs are needed in Indiana. Union workers just don’t want to see their livelihood jeopardized in a way they feel is unnecessary.

But republicans don’t view it as jeopardizing, in fact they believe right to work will give union workers more rights than they have now.

According to republicans union workers will be able to hold their unions accountable to ensure they are getting the best service out of them for the money they pay in dues.

Republicans say no one should be forced to pay union dues in order to get a job, and this legislation will protect people from that. But union workers say that protection already exists; if a person doesn’t want to be in a union, they can find a non-union shop to work at.

While some claim right to work legislation is just a ruse to break unions, something democrats have accused republicans of wanting to do for years, unions continue to operate in right to work states across the country.

Whether those unions have the same political influence and ability to successfully obtain what their members require is a different story.