The scientist, the twins and the experiment that geneticists say went too far 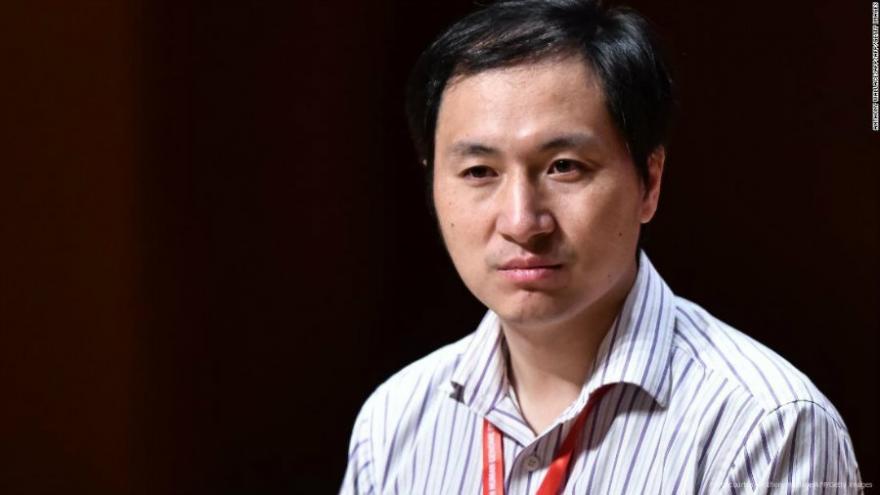 (CNN) -- Humanity was reluctantly dragged into a new era this week.

In a video posted on YouTube, Chinese scientist He Jiankui announced to the world that he successfully used the gene-editing tool CRISPR-Cas9 to modify the DNA of two embryos before birth, essentially creating the world's first genetically modified humans.

The news, delivered on the eve of a high-profile scientific meeting in Hong Kong on human gene editing, left the science community in shock. "I see it as one of those moments that happens once every few decades," said William Hurlbut, Senior Research Scholar at Stanford University Medical Center's Department of Neurobiology. "Where someone does something that so dramatically changes the landscape that the world will never be the same again."

But the scientist who accomplished this history-altering feat was not celebrated nor lavished with praise. In fact, his whereabouts are currently unknown. He skipped out early of the very event where he presented his research amid calls for a probe into this work. The Chinese authorities have opened an "immediate investigation" into He and ordered those involved in the project to suspend their activities.

Editing the DNA of human embryos that go on to deliver has never been done before. And with good reason, scientists say. The technology is still in its infancy and could lead to a multitude of unknown genetic complications later in life.

Scientists have reached an understanding that implanting such an embryo is a boundary that shouldn't be crossed until the risks are reduced or eliminated. "No one expected that someone would do this experiment on a human embryo," Feng Zhang, one of the inventors of the gene-editing technique CRISPR and member of the Broad Institute of MIT and Harvard told CNN. "The scientific community didn't actually know anything about what was going on."

He, a professor at the Southern University of Science and Technology in Shenzhen, said he was "proud" of his work that resulted in two ostensibly healthy twin girls born from embryos altered to make them resistant to HIV. But he was condemned by his peers and the experiment was labeled "monstrous," "unethical," and a "huge blow" to the reputation of Chinese biomedical research.

That He could tinker with life changing technology away from the eyes of regulators and purportedly even the university where he conducted the experiment, has raised serious ethical questions around the transparency of gene editing and sparked calls for a globally binding code of conduct.

The case also places renewed scrutiny on China, a leader in the field of genome editing and biotechnology that has historically had a reputation for sidestepping ethical questions in favor of innovation.

But deeper questions are being asked as to whether it is now inevitable that this technology will be used in the future.

"Never before have humans had power like this over our own biology," Hurlbut said. "We are now in the era of germline genetic engineering."

Ultimately, genome editing shows huge promise in one day treating diseases that are currently untreatable, such as sickle cell disease, or cystic fibrosis. But scientists at the Second International Summit on Human Genome Editing, where He appeared on Wednesday, overwhelmingly said the science needed to be made as effective and safe as possible -- and it was "irresponsible" to use germline editing in a clinical setting at this stage.

Apart from raising ethical concerns, scientists said the gene He "edited-out," called CCR5, is crucial to the human immune system, and removing it increases the risk of susceptibility to other diseases such as the West Nile virus and influenza. Other critics pointed to the fact that the procedure was not medically necessary as there are other treatments for HIV.

Making changes to an embryo could also have unknown consequences that could be passed down to future generations.

It was evident that He had not fully considered the potential long-term social effects on the twin girls. When one audience member at the summit asked whether He had thought about how the girls would see themselves and how they would be treated by society, he replied: "I don't know how to answer this question."

Scientists at the summit pointed out that He's approach to the study had been flawed from start to finish, in particular the way he obtained informed consent from the parents -- a process that took place over just two sessions lasting a total of three hours, and without an independent third party to properly explain the risks and benefits.

He's research has prompted scientists to call for greater transparency and some form of global governance in the field.

"There has been a failure of self-regulation by the scientific community because of the lack of transparency," said Conference Chairman and Nobel laureate David Baltimore on Wednesday.

That the announcement of the world's first genetically edited babies came out of China is perhaps not surprising.

Chinese scientists have accomplished many firsts in the genome world, including the first CRISPR-edited monkeys, the first use of the gene-editing tool CRISPR-Cas9 in humans, and the first reported use of gene editing technology to modify nonviable human embryos.

China has also pumped huge amounts of government money into gene-editing technology, using it to lure leading Chinese scientists living abroad back to the country, as well as foreigners who see the country as fertile ground for this kind of research.

"I just think right now China is a lot more driven, they incentivize their scientists to move faster and be bolder and it shows," said Victor J. Dzau, President of the Institute of Medicine at the US National Academy of Medicine.

Last year, China spent a record 1.76 trillion yuan ($254 billion) on research and development, and the country is catching up with the US' investment in the same area, spurring a genetic arms race that has been labeled "Sputnik 2.0" by Dr. Carl June, an immunotherapy specialist at the University of Pennsylvania.

And Chinese regulators appear more open to the new tech than its US counterparts. As of the end of February 2018, there were nine registered clinical studies testing CRISPR-edited cells to treat various cancers and HIV infection in China, according to Goldman Sachs analysis in April. That's compared to one in the US after the Food and Drug Administration lifted its hold on the first US-based human CRISPR trial in October.

"It's clear that this is the new frontier," said Hervé Chneiweiss of France's Centre National de la Recherche Scientifique. "It's clearly the gold rush on any kind of new knowledge that could be translated into new treatments."

Many of these treatments exist in a legal gray area. Currently, each country has their own rules and regulations surrounding gene-editing. China has several loosely-worded regulations restricting experimental science, including rules on embryo research. A 2003 directive to in-vitro clinics by the Chinese Ministry of Health barred "clinical experiments" that "violate ethical or moral principles."

"The problem is there are no penalties" if the guidelines are breached, said Renzong Qiu of the Chinese Academy of Social Sciences.

In an effort to show the world that China is holding up ethical standards, the nation's vice minister of the Ministry of Science and Technology, Xu Nanping, said Thursday that He had "brazenly violated Chinese laws and regulations and breached the science ethics bottom line."

Both the hospital named in He's ethical approval documents, and the university he is affiliated with, deny involvement in the procedures. And in a joint statement issued Monday, more than 120 Chinese scientists condemned the research, saying that "directly experimenting on humans is nothing but crazy."

"There's a misconception that the advance in research must necessarily come with being more flexible with respect to regulation," said David R Liu, professor of chemistry and chemical biology at Harvard University, who has pioneered improving versions of CRISPR. "I caution that people should not take away from recent news that China is being less vigilant or less caring about these ethical breaches than any other country."

In the short term, perhaps the greatest risk of misuse is not so much direct harm to people but the potentially chilling effect on legitimate research should governments and regulators push for greater restrictions.