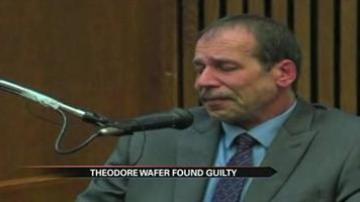 DETROIT -- The Detroit man who was accused of shooting and killing a teenage girl on his front porch has been found guilty.

A jury found Theodore Wafer guilty of 2nd degree murder and voluntary manslaughter in the death of Renisha McBride.

The jury began deliberating on Wednesday after 9 days of testimony.

He will be sentenced later this month.

Wafer could face life in prison.
Share this article: