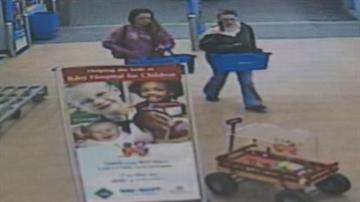 MISHAWAKA, Ind. – Over the past two-weeks thieves have been stealing donation bins for children’s charities from area Walmarts.

On Monday morning in South Bend two people in a red Ford Taurus were seen stealing a donation bin from the Wal-Mart on Ireland Road.  Over the past week, two men, driving a brown Chrysler Sebring with a Michigan license plate containing the letters “CHY,” were spotted stealing collection jars from Walmarts in Elkhart County.  On Jan. 26, surveillance video from the Walmart on Indian Ridge Boulevard in Mishawaka shows a man taking the collection wagon from the front entrance.  Police are looking for two men and two women as suspects in the theft in Mishawaka.  Al the thefts occur late at night or early in the morning.

“Anybody with any information, we urge the assistance of our citizens to help catch these subjects so we can stop them from taking money from families that need them,” said Lt. Tim Williams of the Mishawaka Police Department.  “These donation bins for Riley’s and the Miracle Network, these are all for local families.”

Anybody who witnessed the thefts or recognizes the suspects is asked to call police.  Families who have benefited from help from Children’s Miracle Network and Riley Hospital for Children say they’re heartbroken at the thefts.

“I assume it’s probably someone who doesn’t have children, somebody who thought they’d just get a quick nickel or dime,” said Bob Yenna, whose daughter was saved by Riley’s.

When Yenna’s daughter Heather was four-years-old she was diagnosed with a rare and very deadly form of cancer.  So rare, in fact, that at the time doctor’s in South Bend couldn’t figure out what it was and sent the Yenna’s to Riley Hospital for Children in Indianapolis.

“The very next day they did surgery in the morning, about a 12-hour surgery and removed a lemon-sized tumor from her head,” Yenna described.  “My daughter wouldn’t here without Riley Children’s Hospital.”

Riley provided a place to stay, expert medical advice and assistance in paying for medical bills.

“By the time she got done her bill was well over a million dollars,” Yenna explained.  “Riley won’t turn kids away, but somebody has to pay this bill.”

Yenna, a teacher at Grissom Middle School in Mishawaka, has helped organize fundraisers for Riley.  He knows that Riley only functions through donations, many of which come from the little collection boxes placed in stores.

“They need this money,” Yenna said.  “Without this money there may be children that cannot get the treatment they need to get and we know what can happen if that occurs.”

According to Lt. Williams, police are unsure whether the thefts are all being carried out by the same people.  But said he hopes they are as police don’t want this kind of theft to become a trend.

Anyone with information on any of the thefts is asked to call the South Bend or Mishawaka Police Departments or the Elkhart County Sheriff’s Department.