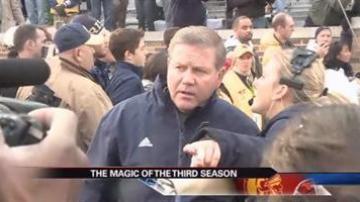 NOTRE DAME, Ind. -- Frank Leahy, Ara Paraseghian, Dan Devine and Lou Holtz all have one thing in common: they all won a national championship in their third season as head coach.

As the Irish head into the game that will decide whether or not they will go for a national championship in January, Coach Brian Kelly has downplayed the hype all season long.

"I get my weekly card from Ara. Each week he hand-writes a note to me and you know the great thing is he's unassuming," Kelly said. "He's done this, he's been there but he'll write a note like he doesn't wanna assume anything you know, just talkin' as a Notre Dame fan and alum. It's great to communicate with him."

Kelly said that he has invited Ara to to watch the games from his coach's box but the former coach has politely declined. Preferring instead, Ara said he has the best seat, in front of his TV.