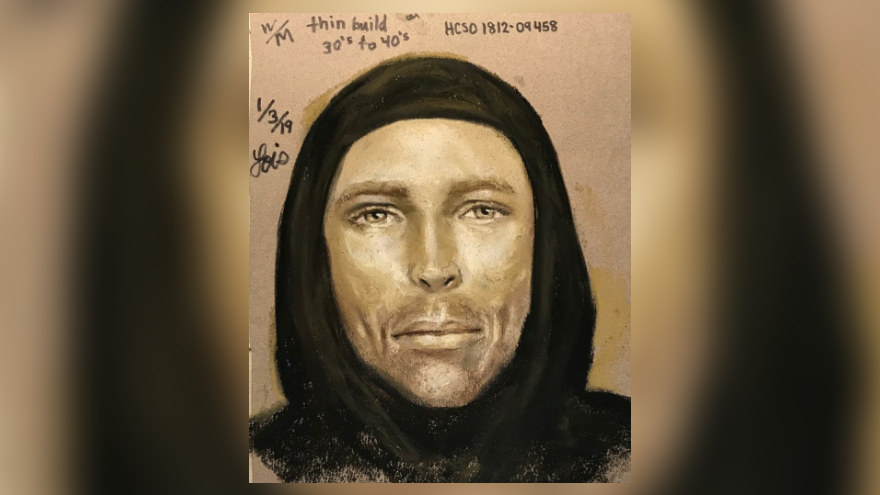 (CNN) -- Eager to catch an elusive killer, authorities released a composite sketch Thursday of a suspect in the drive-by shooting of a 7-year-old girl.

Jazmine Barnes was killed while riding in a car with her family Sunday morning. Since then, the Texas girl's senseless death has garnered nationwide attention.

Tips have poured in to investigators in the Houston area, but the gunman is still on the loose.

The sketch was compiled from descriptions given by Jazmine's mother and three sisters, who were also in the car. Authorities said a man in a red or maroon pickup drove up next to them around 7 a.m. and opened fire for no apparent reason.

The sketch shows a white man in his 40s with a 5 o'clock shadow. He was driving a red, extended-cab pickup.

'My baby is not responding at all'

In an interview with CNN, Jazmine's sister, Alexis Dilbert, and mother, LaPorsha Washington, recalled the truck pulled up to their passenger side before going around to Washington's driver's side as the family made an early morning coffee run.

"I didn't even hear the first gunshot. All I remember is my glass shattering on my window, and then I heard the shots go off," said Washington, 30.

"I think I'm hit in my arm," Washington recalled saying to her daughters. She was later hospitalized for her injury.

Washington said she realized Jazmine had been shot after Alexis, who is 15, called Jazmine's name and she didn't answer.

"When she said Jazmine the third time, I turned the light on in the car and turned around and looked at my baby," Washington said. "She was leaned over on the door and blood was everywhere."

Washington told another daughter, who was in the backseat with Jazmine and her 6-year-old sister, to call 911.

She told Alexis, who was in the front seat, to search the internet for the nearest hospital: It was seven minutes away.

Washington said she made a U-turn and hopped back on the Sam Houston Tollway, speeding, heading for the hospital.

But her car started to shake.

"Get help. Please, get help," she said she told her two teenage daughters, who jumped out and tried to flag down drivers on the freeway.

Alexis said: "Me and my sister got out the car and we just started, like, shouting for somebody to come and nobody was stopping. Everybody just kept passing us by."

"Sir, can you just get my baby and get her to the hospital?" she said to the man. "I think my baby's not responding at all."

Washington said she suspects the attack may have been racially motivated. She said she didn't have tinted windows, and the gunman could see "a black mother with four beautiful children, girls, in this car."

The sheriff has said the family didn't appear to do anything to incite the truck's driver.

Washington's hand was in a sling as she sat in her home Thursday. She laughed recalling the memories of her daughter.

She said Jazmine was her "love child," who would hug and kiss everyone, even strangers. She liked the color purple and dressing up in her mother's clothes.

Her favorite song was "Wake up in the Sky" by Bruno Mars, Gucci Mane and Kodak Black, Washington said.

In the car, she usually sang louder than the radio, her mother said.

"I swear, they keep me on my toes 24/7. They're so amazing," Washington said of her children. "We're missing our set."

Washington said her youngest, the 6-year-old who witnessed the shooting, drew a picture on Thursday of her and Jazmine playing.

"It's like what can I say to her, what can I do for her? ... I don't know what to do because I can't even fix myself," Washington said, sobbing.

No one except the gunman knows why he shot into the car.

But out of this tragedy came solidarity in grief.

A $100,000 reward is now available for information leading to the arrest of the killer, social justice activist Shaun King announced,

And more than 1,800 donors have contributed to a GoFundMe account for Jazmine's funeral expenses and family.

A community rally and funeral

Jazmine will be memorialized Tuesday during the "Justice for Jazmine Barnes Community Rally."

The event will honor "all murdered victims in Houston/Harris County," organizers said.

Services for Jazmine will begin at 10 a.m. Tuesday with a viewing at Green House International Church, followed by her funeral at noon.

Afterward, mourners will release purple balloons in her memory.

The widespread impact of Jazmine's death

The inexplicable killing has afflicted mourners near and far.

Bernice King, the youngest child of the late Rev. Martin Luther King Jr., said there needs to be more public dialogue about what happened to Jazmine.

"Just a baby," King tweeted. "It is truly unconscionable what's happening to children in America and how the murder of this precious little Black girl isn't permeating our media as much as a wall. Does America care about Black and Brown babies inside or outside of its borders?"

Even for officers accustomed to horrific crimes, Jazmine's death has had a profound personal impact.

"Help us find this monster before he murders another innocent child," tweeted Joe Gamaldi, president of the Houston Police Officers' Union. "Prayers for Jazmine's family, no parent should have to bury a child."

Attorney S. Lee Merritt, who is advising Jazmine's family, said the grief is compounded by the unknown.

"The inability to capture or even identify this killer is really weighing heavily on that family," he said.

Jazmine's father, Christopher Cevilla, thanked the countless supporters who are trying to help. He also had a message for anyone who might know about the attack:

"I just want anybody, whoever, out there that knows anything about the murder of my daughter, to just please step up as if it was your own," Cevilla told reporters. "Just put yourself in my shoes, in my family's shoes."