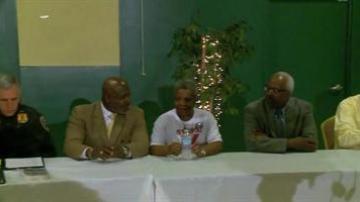 SOUTH BEND, Ind. -- South Bend Police say the men who did not show up to the violence intervention meeting could be in violation of their parole.

The meeting was a part of the men's parole or probation terms. Those who skipped out could face penalties like weekends in jail, increased drug testing, community service hours, or even arrest.

The meeting was held to send a message to gangs and street groups to stop the gun violence.  Officials wanted that conversation to go back to the individuals on the streets.

Isaac Hunt, a community resource advocate, says there is an incentive.

"To be able to get some of these individuals who are in the groups or gangs the opportunity to receive social services," says Isaac Hunt, community resource advocate, Goodwill Industries of Michiana

That means the city is providing these men the help they need with jobs, housing and food, as long as they cooperate with police to stop the violence.

Hunt is a mentor to these men and he says most of them do want to get out of the vicious cycle of street violence.

"From the conversations I’ve had with a few of them it seems as if they really want to get out of their current situation that they’re in, they just don’t know how to get out of it," says Hunt.