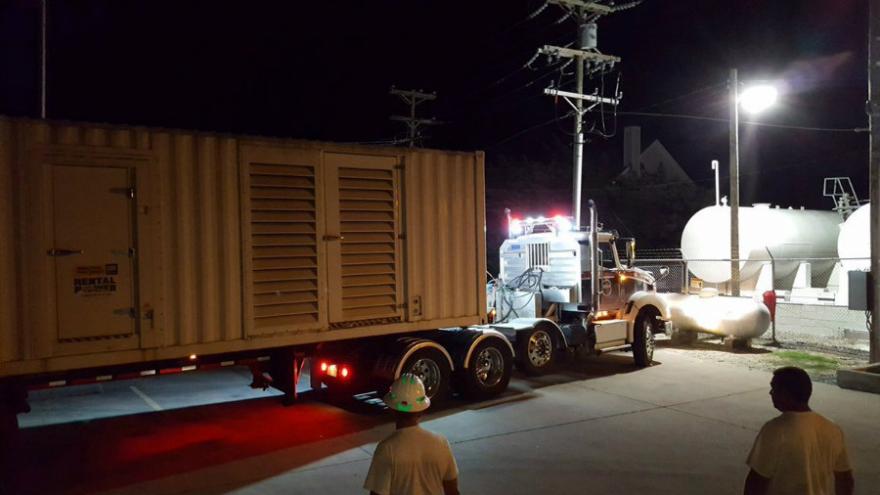 By Joe Sterling and Rose Schmidt

(CNN) -- Kalla Bruhl and her boyfriend's family had their vacation short-circuited.

They were among thousands of tourists on North Carolina's Ocracoke Island who had to pack up and evacuate after a major power outage.

"We were all upset," said Bruhl, 22, of Shepherdstown, West Virginia, after the power went out about 4 on Thursday morning. "We got out of there early, it was so hot in the house."

They ferried out of Ocracoke and headed to her beach house in Delaware.

"We did end up enjoying the time that we spent there. We just wish it didn't end so abruptly," she said. "We definitely didn't have time to do everything we wanted."

More than 2,300 people and 893 cars have been evacuated from Ocracoke Island as of Friday afternoon, Hyde County spokesman Donnie Shumate tells CNN.

"Everyone is starting to get off the island and we are hoping to have the complete evacuation completed soon," Shumate said.

"Owners of rental properties there have been going door-to-door to make sure everyone is out. And if people refuse to leave, they could be guilty a class-two misdemeanor," he said.

According to state and utility officials, a transmission line was cut during construction work and it knocked out electricity on two islands in the tourist mecca known as the Outer Banks -- Hatteras Island in Dare County and Ocracoke Island in neighboring Hyde County.

No evacuation orders were made for tourists on Hatteras Island, but people trickled out, made plans to do so or went with the flow and adjusted.

It's not known how long it will take for power to be restored.

"We feel as though we're basically camping in a house," she said on Friday.

The sea breeze didn't permeate their rental house, so it was tough sleeping. She and her family were planning to leave in the evening.

"It will be nice to sleep in air conditioning tonight," she said.

The situation has inconvenienced travelers and a region dependent on tourist dollars. At the peak of the vacation season, Gov. Roy Cooper signed a state of emergency on Thursday.

"This declaration will allow us to move much needed resources through the state as quickly as possible to help restore the power to Ocracoke and Hatteras Islands," Cooper said.

The declaration allows officials to get the resources in place to deal with the emergency. It waives restrictions on weight and the hours of service for fuel, utility and other truckers working to help restore power.

Hyde County's board of commissioners on Thursday issued a mandatory evacuation of all nonresidents from Ocracoke.

While the commissioners didn't put a deadline on when visitors should be out, they asked that people be off the island by midday Friday.

Shumate said several thousand visitors had been on Ocracoke, which can only be accessed by ferry. Since late Thursday, they've been ferried out.

Dorothy Hester, public information officer in adjoining Dare County, said there were about 50,000 to 60,000 people in the beach areas -- both residents and visitors -- and there had been no evacuation orders.

The outages rolled through Hatteras and Ocracoke after PCL Construction, the company constructing the new Herbert C. Bonner Bridge, told the Cape Hatteras Electric Cooperative (CHEC) that it "drove a steel casing into the underground transmission cable that runs between the south end of the Bonner Bridge and the overhead riser pole."

And that caused the outage.

CHEC provides power to the seven Hatteras Island villages and its transmission cable goes underneath Hatteras Inlet and into Okracoke.

The utility said it was providing temporary power to Hatteras Island using a diesel generating plant in Buxton and Frisco and is installing nine generators.

"We are hopeful that once these nine generators are installed, we can provide more continuous temporary power," said Laura Ertle, CHEC spokeswoman. "We're going to hook them up through the island."

There will be rolling blackouts to help conserve power.

Once they are hooked up, people need to keep off air conditioning and limit use of appliances, she said.

It's hard to say how long the repairs will take.

It was the 21st year that Erica Carlson's family vacationed on the Outer Banks, but the first time there was an extended power outage.

Carlson 48, of Oakland, Maryland, was part of a group of 15 in an oceanfront rental in the community of Waves. They planned to have a family poker tournament. And the outage didn't stop them. They bought candles and ice and a battery lantern and put them to good use.

"We play lots of card games on vacation but the Texas Hold 'em tourney is a tradition. When we lost power, my nephew was really disappointed, because he had been looking forward to it," she said.

"So we all just decided we would light some candles and play anyway."