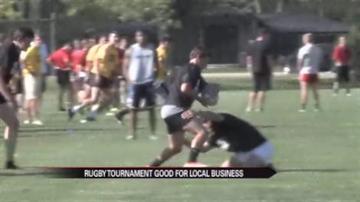 ELKHART, Ind. --Thousands of high school rugby players will be invading Elkhart this Thursday and that means a nice boost for the local economy

“We have gone 13 of the last 15 years to the national championship,” said Penn High School rugby Head Coach Bart Bottorff.

The Penn High School rugby team is no stranger to the National Rugby tournament, but this year they have the home field advantage, because they are hosting the tournament in Elkhart.

“It is an honor we are going to show them some midwest hospitality and then hopefully kick their tails on the field too,” said Bottorff.

With 24 teams from 18 different states coming into town for the tournament, hotels are filling up fast and restaurants are ready to rake in the cash.

“I think it’s great for the community and that’s why we are excited to host it.  It will bring in well over a half a million dollars to the area,” said Bottorff.

Although the players think the economy boost is great, they are more focused on the game.

Penn High school was ranked fourth in the country this year by Rugby Magazine and they were runner up in the championship last year.

“I am really pumped. We have been working the whole season for this,” said Captain Teddy Terezis.

“Our biggest competitors are going to be Gonzaga from D.C. and Dixon from California,” said Captain Mitch Graham.

Players say regardless of how stiff the competition is this year, they are taking home the championship.

“I think that we have it this year,” said Graham.

The tournament kicks off this Thursday in Elkhart.  The championship will be on Saturday.