Thousands still without power in Elkhart 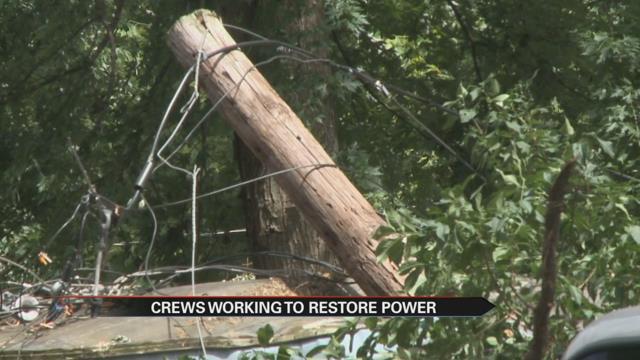 Thousands of people in Elkhart County are still without power after this weekend’s storms took out several power lines.

“I’ve never been this long without it, and I need my lights on,” Mary Johnson, who lives of Independence Street said.

Johnson and her neighbors haven’t had power since Saturday’s storms knocked it out.

Davis even stayed in a motel for two nights for electricity.

It’s an inconvenience caused by heavy winds, which brought down dozens of trees and power lines.

One pole even went through the roof of the trailer next to Johnson’s.

“I was scared. I was very scared,” Johnson aid.

But Monday, under sunny skies the only thing neighbors have to fear is more time without power.

They were excited to see Indiana Michigan Power crews working on it throughout the day.

But they’ve got a lot of work ahead of them.

Elkhart was one of the hardest hit areas in Michiana.

A representative from Indiana Michigan power says there are hundreds of circuits down.

There are also broken transformers and poles that need to be replaced.

The muddy conditions from the rain also make it harder for the trucks to get through to fix it.

The power company predicts the lights will be back on by midnight.