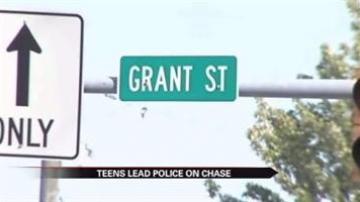 The chase started after police tried to pull the girls over for driving without headlights but they girls speed off.

Officers chased them for about three minutes and reached speeds of 60 mph before the girls finally crashed.

"We don't see a 13-year-old behind the wheel very often," Chris Leroux of the West Lafayette police said. "In my 25 yeas, I don't know that I ever have to be honest with you. So, it's certainly an odd occurrence to see, something that surprised the officers as much as it did anybody."

No one was hurt in the chase.

Police did arrest the teens and officers say that the car belonged of the girls' parents.