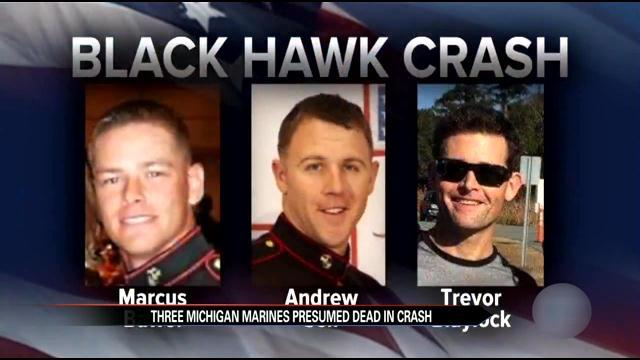 Nine of 11 servicemen's bodies have been recovered after an Army helicopter crashed off the Florida Panhandle Tuesday night.

According to the Florida News Journal, divers found the Black Hawk helicopter that went down in heavy fog.

Four Guardsmen and 7 Marines died after that crash during a training exercise.

The bodies of the two remaining Guardsmen are believed to be inside the aircraft.

Divers found the Black Hawk in several pieces at the bottom of the Santa Rose 25 feet underwater.

Among those presumed dead by officials include three men from Michigan.

The Warren, Michigan Mayor spoke yesterday about the men's deaths.

Bawol had planned to marry his fiancee in October.

Blaylock had a wife and two daughters.

And Seif was awarded the Silver Star March 6th, which is the Marine Corps. third highest award for valor.