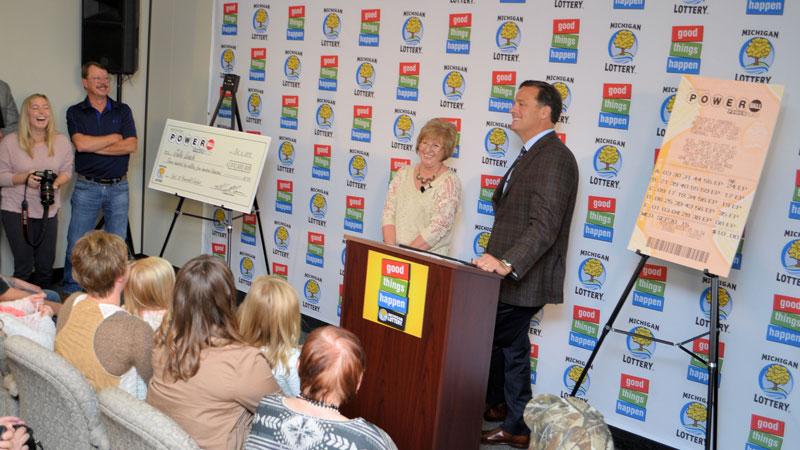 A 50-year-old woman from Three Rivers claimed the $310.5 million Powerball jackpot from the drawing on September 30th.

Julie Leach, 50, says she is still in shock.

“I’ve played the Lottery for a long time and have dreamed of this day, but I never thought it would actually come,” Leach said. “I have been in shock since I checked my ticket Thursday morning, and I don’t know if it will ever wear off.”

“My boyfriend told me I should stop and buy some Powerball tickets on my way to work because the jackpot was so huge,” said Leach. “I stopped at the Shell station and bought 10 Powerball plays for $20. When I got back to my car I tossed the tickets in my console and went to work.”

During her lunch break about 1 a.m., Leach was waiting for her food in a drive through lane when she remembered she had purchased tickets for the Powerball drawing.

When Leach returned to work, she quietly asked a couple of co-workers to double check her ticket.

“Both of my co-workers thought I was playing a joke on them,” said Leach. “One of my co-workers was sure it was a hoax, but after a few minutes he said ‘Get the hell out of here, you’re a winner!’ That is exactly what I did, I clocked out for the final time of my 20-year career and went home.”

Once home, she woke up her boyfriend of 36 years, Vaughn Avery, to tell him the life changing news.

“Vaughn couldn’t believe what I was telling him,” said Leach. “We sat in the living room of our house for hours laughing and crying, trying to process what was happening and how our lives had changed. We would have been pleased with $500,000 or $1 million, to win $310.5 million is unbelievable.

Leach chose to receive her $310.5 million jackpot as a one-time lump sum payment of $197.4 million, rather than an annuity. After tax withholdings, she will receive about $140 million.

With her winnings, Leach plans to pay off her bills, purchase a new home for herself and Avery, as well as a new home for each of their children, and travel with her family.