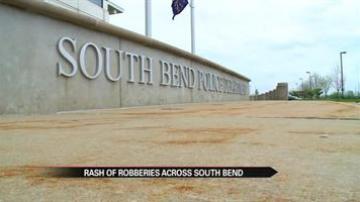 SOUTH BEND, Ind. -- There were three armed robberies and several car break-ins over the weekend in South Bend. Police say the nice weather was a contributor, but the relationship between crime and weather is often misunderstood.

Over the weekend, a young man was walking on Western Avenue and someone pulled up and demanded his wallet and cell phone.

Another suspect crawled into an elderly woman's kitchen window, pepper sprayed her and stole her purse.

We went to the woman's home and her daughter answered the door. She said her 78-year-old mother was recovering and sleeping.

There were also a lot of car break-ins over the weekend.

With the warm weather more people are out walking through neighborhoods and they're also peeking in car windows to see if there's anything there worth stealing.

"We see a lot of crime of opportunity. We see larceny numbers go up when it gets warm like this. We'll see some burglaries spike. People who have a proclivity to do burglaries are just kind of out walking around the same way someone would just go out and spend a lot of time taking their dog for a walk," said Captain Phil Trent of the South Bend Police Department.

Captain Trent says warm weather causes the first slight spike and the next spike occurs when school lets out for the summer.

He says the kids no longer have the structure of class time so they find themselves trying to find activities to fill the day.

For some kids they pass the time by wandering around and when large groups of kids or teenagers get together it sometimes ends in crimes such as vandalism, theft, larceny or burglaries.

"And they lose that sort of you got to be home by 9 o'clock or you got to be home by 8 o'clock because you got school tomorrow. And when that happens that's when you start seeing kids wandering around the streets and they get into trouble just like the adults do. Wandering around in the streets. they become victims of crimes just as much as they become involved in petty crimes like larceny, vandalism, et cetera," said Trent.

The city of South Bend does have a curfew for kids.

Children younger than 15 can only stay out in a public place until 11 p.m. no matter the day of the week.

Once school lets out, police says they will be doing curfew sweeps and parents will get fined if their kids are picked up.