Tiger Woods: 'I can still grind it out with the best' 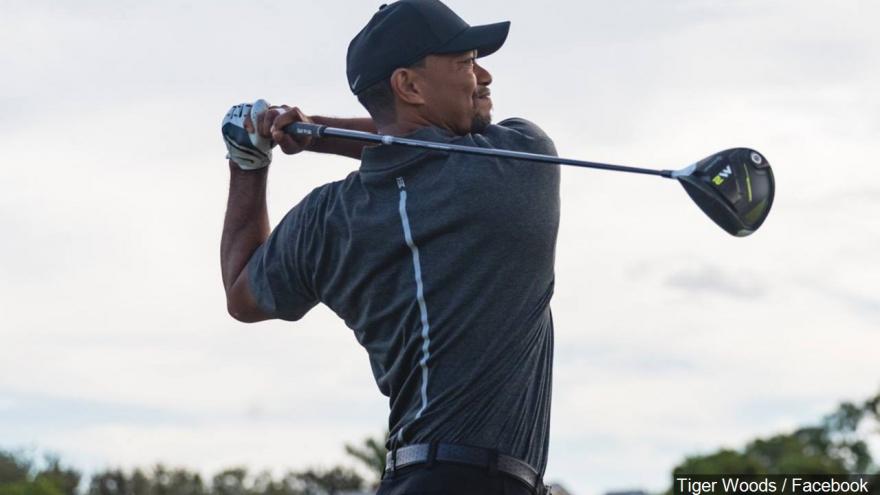 (CNN) -- Tiger Woods took solace in the fact that he can still "grind it out with the best of them," after he secured his best full-field finish at a PGA Tour event in more than two years.

The 14-time major winner never troubled the top of the leaderboard at the Farmers Insurance Open in California, finishing at three under par, seven shots off the lead.

But he carded four birdies in a closing 72 on Sunday, giving himself a first official top-30 finish since the Wyndham Championship over two years ago.

"I played a lot better today," said Woods of his final round performance which saw him end up tied for 23rd position, one shot ahead of world No. 2 John Rahm.

"I was pleased after not playing for a couple of years," Woods added, having taken a number of shots from what he described as "weird lies" following wayward drives.

The tournament was yet to be decided at the close of play Sunday, with bad light forcing organizers to postpone the decisive playoff.

Alex Noren, Jason Day and Ryan Palmer had all tied at 10 under after four rounds, with the latter eliminated after only making par on the first playoff hole.

In the end it was former world No. 1 Day who triumphed, with the Australian edging out Noren of Sweden for the $1,242,000 top prize on Monday.

It is the 11th PGA Tour title of the 30-year-old's career and first since the 2016 Players Championship.

"It's been a long time coming," Day told the PGA Tour, alluding to his close relationship with his mother, Dening. "I know that last year wasn't the greatest season for me and I had a lot of stuff going on off course.

"It was a little distracting with my mother obviously having cancer. It's special because I worked very hard in the off-season to try to get back to this position.

"I was up all night last night just thinking about getting the next win, number 11, and you know I'm really happy. I had my best mate on the bag and it was a nice way to go."

Day had an MRI scan a little over a week ago, and acknowledged he is planning to change a few things in his swing to relieve some of the pressure on his back.

"Going back to earlier this week, I never thought I was actually going to play because of my back," he said. "I'm just very thankful for my whole team. We just had to stay patient. Obviously my goal is to get back to world No. 1, and this is a good step in the right direction.

WATCH: How would Jason spend his perfect Day?

Woods might have climbed the standings further still, had a spectator not visibly distracted him by shouting "get in the hole" during his backswing on the 13th green.

That potential birdie putt was missed, but Woods remained pleased with his short game at Torrey Pines, tweeting "I scrambled my butt off but happy with my first event back!".

"To be able to take cuts like I did ... it's something that I didn't know that I could do yet," he told reporters.

Woods often outdrove his younger adversaries, even with his fused back -- smashing it 358 yards at the first hole Sunday.

But he was the first to acknowledge there remains a lot of work to do off the tee.

The 42-year-old was last in the field in driving accuracy, hitting fewer than a third of fairways over the course of the four days.

Does Tiger's latest comeback give you cause to believe he can win another major? Have your say on CNN Sport's Facebook page

"I can feel some of the things I'm doing wrong in my swing," Woods said, "so we're going to go back to work."

Woods is expected to be back in action for February's Genesis Open at the Riviera Country Club in Southern California.

A new dawn for Chinese golf?

In his place, Li Haotong of China secured the biggest victory of his career to date, setting a new tournament record in the process, finishing up 23 under par.

Li, 22, will now become his country's first male golfer to break in to the world's top 50.

McIlroy, for his part, acknowledged he "just didn't do enough" to enough to add his name to the trophy for a third time.

"The competitor in me is very disappointed right now," the four-time major winner told reporters at the scene of his first professional victory.

"I tried until the very end and made him win it in the end, which was all I could do,

Li carded 30 birdies over the course of the week, three more than the all-time Dubai Desert Classic record set by Tiger Woods in 2001.

"Over the last four holes I hit some of the best shots of my life," a delighted Li said.

Previously best remembered for throwing his putter into a Parisian pond at last year's French Open -- prompting his mother to wade in to retrieve it -- Li is now hitting the headlines for all the right reasons.

How good can Li Haotong become? Have your say on CNN Sport's Facebook page

The previous two winners of this tournament -- Danny Willett (2016) and Sergio Garcia (2017) -- have gone on to win the Masters two months later.