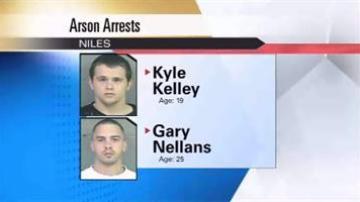 NILES, MI -- Two Niles men are behind bars serving time in prison for arson after an anonymous tip came in that led to their arrest and prosecution in Berrien County. Now it looks like the tipster is going to get quite the reward.

19-year-old Kyle Kelley and 25-year-old Gary Nellans, had crashed a stolen vehicle into the FOP building back in March and police say they set the vehicle on fire and the fire spread to the FOP lodge.

Paul Crouch remembers the early morning blaze like it was yesterday. "The fire department did a marvelous job of containing the fire, plus it was wind-still and there were four departments down there," Crouch said.

Crouch lives directly next to the Freternal Order of Police property. His wife told ABC 57 News the sirens woke her from sleeping around 5 a.m., she woke her husband and together they watched the fire fighters in action from their window.

"We own the property up to the fence of the FOP park, what you see now is just an empty lot," he said.

Police arrested and the courts convicted Kelley and Nellans of setting the fire. Through tips and then informants police discovered the two had crashed a stolen vehicle into the lodge. They then set the vehicle on fire apparently in an attempt to eliminate evidence. The flames then spread to the FOP lodge, resulting in a total loss of the building.

In July Nellans was sentenced to 32 months in prison for his role in the incident and Kelley received a five year sentence.

In a press release put out on Friday the Niles Police Department said they worked with the Michigan Arson Prevention Committee to offer a $5,000 cash reward to be paid to the person who gave detectives the tip. Police say the information provided by the person was instrumental in the successful prosecution of the suspects.

The Niles Police Department is actively investigating five arson fires set earlier in the year and is asking anyone with information about these arson house fires to contact them at (269) 683-0404. Tipsters can also use the Niles Police anonymous tip line at www.tipsoft.com.