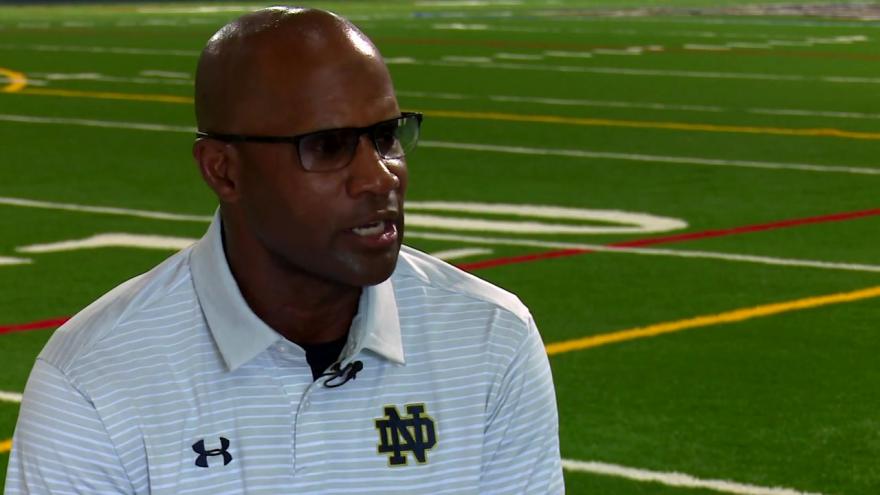 Notre Dame Head Coach Brian Kelly has tapped into the network of former Irish players to fill out his coaching staff including Todd Lyght. The defensive backs coach had a spectacular career in South Bend and beyond.

Lyght was a 2-time All-American cornerback at Notre Dame from 1987-to-1990 and a member of the 1988 national championship team.

"I'll never forget being in the locker room and the love that we shared and the camaraderie that we had. We were such a tight knit team and really, really close. Very tough, very physical team and I laugh because when I tell stories about that team, it wasn't only important for us to beat you, we really, really wanted to punish teams, you know what I mean. And back in those days, it was more of a physical mind set. Three yards and a cloud of dust, deep ball-play action type ball game," Lyght said.

That 1988 national championship team will forever go down as one of the best not only in Notre Dame history, but all of college football.

"You know it was amazing. I had a great experience here at the University of Notre Dame under Coach Holtz. We were able to win a lot of games. Played with some great players like Tony Rice, Chris Zorich, Michael Stormbreaker, Tim Brown, Jerome Bettis, I could go on and on with the guys I got to play and that was really, really fun," Lyght said.

Does he laugh when he lists off those names, like a cast of characters?

"Absolutely, You know it's funny because I tell a lot of people that I remember when I got to the Rams as a rookie my first year in the league and I was looking around the locker room, and we had a couple of really, really good players, but there was about 20-30 percent of the guys that couldn't have played at the University of Notre Dame who were on my pro team. And that really blew my mind because of the talent that we had here. And you never really know, and your expectations when you get to the league that there's going to be all these great players and I was like looking around the locker room and I was thinking to myself, 'That guy couldn't play at my school, that guy couldn't play at my school.' So that was a really interesting wake up moment for me becoming a professional," Lyght said.

Lyght was the 5th overall pick in the 1991 NFL draft by the Los Angeles Rams. It made him the highest-drafted defensive back in Notre Dame history.

To this day, only 11 defensive backs have been taken higher in the NFL draft.

But it wasn't all touchdowns and titles in his early NFL career.

The Rams had 9 straight losing seasons.

"For a long time we were a really bad football team and then we became one of the best teams to ever play," Lyght said.

"We were the best team in the world, we were Super Bowl champions. But the key thing for us was the way we able to play and train so hard. It made the games easy. To play with guys like Isaac Bruce, Marshall Faulk, Kurt Warner, Tori Holt, Orlando Pace where you had this accumulation of great talent but every one puts their own personal aspirations aside and just plays for the team. Those are really, really special moments in time and I'm very, very thankful to be a part of something like that," Lyght said.

Lyght has carried that attitude, work ethic and humility into everything he does.

After 12 years in the NFL, he retired with 37 career interceptions and 4 touchdowns.

"When I got away from the game in 2003, I wanted to start a family. I did that. Had some successful business, got into radio and did all these other things, but the love of football never left," Lyght said.

He broke into coaching at Bishop Gorman High School in Las Vegas and he has made stops at the University of Oregon and the Philadelphia Eagles in the NFL before making his return to South Bend.

"I remember my first day at Bishop Gorman, and I was on the field and I was like gosh I feel so comfortable and I feel back at home as a coach. And I remember thinking to myself, my dream job would be back at the University of Notre Dame. So I'm living my dream right now and I feel very blessed to be doing so," Lyght said.