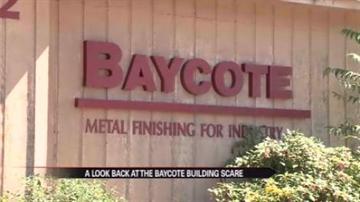 MISHAWAKA, Ind. -- In September, a fire at the former Baycote Metal Finishing site opened all of our eyes to the chemical mess left behind at the industrial site. ABC57 News stayed on-air all night providing residents with the latest information.

Flashing red and blue lights coated the streets of Mishawka after a chemical reaction caused a fire inside the former Baycote Metal Finishing site.

It all unfolded live on TV the night of September 14th.

"Police said a passerby stopped him, stated that there was smoke coming from a building,” said Lieutenant Patrick Protolese of Mishawaka Fire.

Fire was dispatched around 7:15 Friday night.

Soon after, rescue crews went door to door evacuating homes and businesses within a mile radius of the site.

Volunteers laid out cots and pillows for those who had to leave their homes.

"It was kind of scary at first because the smell was horrible by our house. I didn't know what it was, very, very strong,” said evacuee Marge Thomas.

About 35 people and their pets stayed overnight at the school.

They waited for air tests to come back clean before they could return home.

They were allowed back in their homes at 7 a.m. the next day.

The US Environmental Protection Agency had started cleaning up the site in May of 2012.

"A lot of caustics acids, cyanides in miscellaneous materials in various containers that could either react or cause a threat to human health or the environment,” said Paul Atkociunas, EPA’s on scene coordinator.

The fire broke out after 80 percent of the dangerous chemicals had already been removed.

"The end game is to find the offsite disposal for those chemicals and materials,” said Atkociunas.

The EPA says clean-up worked has ceased for the winter due to the safety concerns of site workers. Work is expected to resume in spring of 2013.